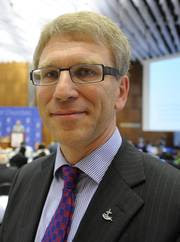 The newly elected general secretary of the World Council of Churches said he believes it is important to maintain and develop cooperation with the Catholic Church.

"The contribution of the Roman Catholic Church to theological work, and also in regard to many social and ethical problems, is very important," the Rev. Olav Fykse Tveit, a Norwegian theologian and pastor, told Vatican Radio Aug. 28, a day after his election.

"The Roman Catholic Church is a universal church, and the World Council of Churches for its part is a global institution, and this opens the road to many exchanges of experience and to a shared evaluation of current challenges," said Rev. Tveit, 48, a member of the (Lutheran) Church of Norway.

He said he hoped to meet with Pope Benedict XVI, "although not immediately."

"I would like to speak with him about our common challenges, but also about our common faith," Rev. Tveit told Vatican Radio. "I have heard him speak and I have read his works, and he is a very important figure for mutual understanding between Christians. I think we have much to discuss together."

The Roman Catholic Church is not a member of the World Council of Churches, although for 40 years a Vatican-WCC joint working group has promoted cooperation and collaboration. The Geneva-based council represents more than 340 member churches -- Orthodox, Anglican, Protestant, United and other denominations -- in more than 110 countries.

In his acceptance speech before the WCC Central Committee, Rev. Tveit said, "I feel that we have a lot to do together," and he asked committee members to continue praying for him.

Since 2002, Rev. Tveit has been general secretary of the Church of Norway Council on Ecumenical and International Relations. He also is a member of the WCC Faith and Order Plenary Commission and the board of directors and executive committee of the Christian Council of Norway.

In Washington, Father James Massa, executive director of the U. S. bishops' Secretariat for Ecumenical and Interreligious Affairs, said Rev. Tveit's election "bodes well for relations between the Catholic Church and the world's largest ecumenical association."

"Rev. Tveit has signaled a desire to deepen relations with the Holy See and to explore avenues of dialogue between Christianity and Islam, which is high on the Catholic Church's agenda," Father Massa said.

"It may be a little surprising to some observers that the WCC chose a European for this post, rather than a candidate from" an area of the world where "the rapid growth of Christian communities is clearly evident," Father Massa said. "Yet Dr. Tveit's election as general secretary of the WCC may signal a widely shared concern among Christians of varying confessions: to reinvigorate European society with the healing and illumining power of the Gospel.

"A similar impulse might have been at play in 2005 when the College of Cardinals elected Pope Benedict XVI, who is also a northern European and a theologian," he added.

Rev. Tveit will replace the Rev. Samuel Kobia, a Methodist minister from Kenya, who began serving Jan. 1, 2004. Rev. Kobia announced in February 2008 that he would not serve as general secretary for another term.