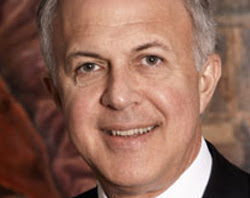 Supreme Knight of Columbus Carl A. Anderson addressed the Meeting for Friendship Among the Peoples in Rimini, Italy on Friday afternoon.

There, he exhorted charitable groups to cooperate in building a “civilization of love” and to follow in the footsteps of Knights of Columbus founder Michael J. McGivney. Over 700,000 people were expected to attend the week-long meeting, which was organized by the Communion and Liberation movement.

Saying that greed, the “worst of human nature,” has been diagnosed as a large part of the economic crisis, he said:

Citing love of neighbor as the key to a sustainable economy, he urged the audience to replace the motivation of Cain, the first fratricide, with the motivation of the Good Samaritan in “every aspect of our lives,” especially business relationships.

Anderson noted the example of Knights of Columbus founder, the Venerable Servant of God Fr. Michael J. McGivney. He discussed one case where the priest personally helped a teenage boy stay with his widowed mother and his family.

“Only Father McGivney’s help saved young Alfred from being wrested from his mother and siblings, and put in a state institution. And let’s not forget that the state that ran those institutions was quite hostile to the Catholic Church,” he remarked.

He then listed the accomplishments of the Knights of Columbus’ charitable endeavors, their fight against anti-Catholic and anti-black bigotry, their pro-life work in support of pregnant mothers and protection for the unborn, and their work in serving both Catholic and non-Catholic troops in the U.S. military.

Anderson recounted how the Knights began to run sports fields for children in Rome who did not have other sports facilities. During the Great Depression, the organization ran job boards to help those who were out of work.

He also mentioned the Knights’ work with the Special Olympics, founded by the late Eunice Kennedy Shriver.

“On a weekly basis, our members cook meals for the homeless, help provide for the needs of those with intellectual disabilities, support women in crisis pregnancies, and the children they bring into the world.”

Noting the Knights’ recent summit on volunteerism as a response to the economic crisis, Anderson urged Catholic groups to “exponentially multiply the good that we do by working together with other groups.”

Cooperation with other beneficent organizations, he said, is an excellent model for Catholic movements as they seek to “transform the world by encouraging people to say ‘yes’ to Jesus Christ.”

“Nowhere is the face of our Church more attractive than in our open embrace of our neighbor,” Anderson emphasized. “Each encounter with those in need is actually an opportunity to create a civilization of love, one person, one act at a time.”

The Knights of Columbus, a lay Catholic fraternal organization, has more than 1.78 million members worldwide. Last year, the organization and its members contributed more than $150 million and almost 69 million volunteer hours to charitable causes.