Bishop says no relationship should get same status as marriage 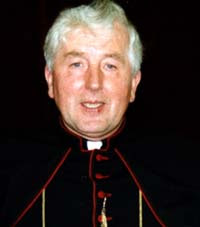 The bishop of Elphin, Dr Christopher Jones, has said that no form of alternative relationship should be accorded the same official status as heterosexual marriage.

The bishop said that while the State must make provision for couples who formed long-term dependent relationships, none of these arrangements should be accorded a status equivalent to marriage, because it would “undermine the status of marriage in the eyes of our people and especially our young people.”

“Nothing changes attitudes as powerfully as legislation," Dr Jones remarked.

Speaking at a diocesan celebration for couples celebrating marriage anniversaries in the Cathedral of the Immaculate Conception in Sligo, he said it was a real joy to see couples and their families celebrating their marriages.

The couples at the event had been married for periods ranging from 20 to 65 years.

Dr Jones said that while it was normal to celebrate success in sport and in many areas of life, it was important to celebrate fidelity in marriage “not only for the couple themselves, not only for the children, but for the community and society. Children born into homes where parents remain faithful to their marriage vows become invariably happy adults and in turn form happy marriages themselves,” he went on.

Conversely, he said, children born into homes where parents failed to honour their marriage vows “can be scarred for life and fail to form happy marriages themselves. They can also become destructive in their communities and society," the bishop claimed.

It was for these reasons, said Dr Jones, that society had enshrined family rooted in marriage in the Constitution. “Through the years people could see that happy marriages and families were essential for the health and happiness of society.”

"It is the absolute responsibility of the Government to honour our Constitution and do all in its power to support and protect marriage and family life as enshrined in the Constitution.”

He criticised the decision of former Minister for Finance Charlie McCreevy to introduce tax equalisation for married couples so that both parents would be attracted to working outside the home. It was truly, he declared, “an anti-family decision".

Bishop Jones told the congregation that he acknowledged that couples who persevered with their marriages had their “difficult moments and difficult days.”

“But unlike so many couple who walk away from each other without any effort or any counselling they faced their worries and their crosses and grew to love each other in the process,” he commented.