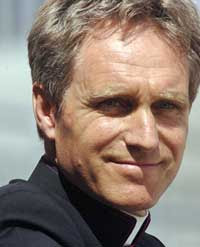 An estimated 1,100 guests joined Msgr. Georg Gänswein yesterday in his home town of Riedern in southern Germany to celebrate 25 years since his ordination.

The private secretary of Pope Benedict XVI celebrated Mass in Latin in the parish church where he was baptized, received First Communion and celebrated his first Mass.

His homily focused on “the simple truth of the faith.”

The number of guests more than doubled the population of the small Black Forest town, which has just 450 residents.

The Pope sent a letter of congratulation in which he gave his apostolic blessing.