Bishop of Scranton to step down next week 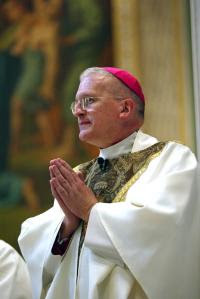 Most Rev. Joseph F. Martino, Bishop of Scranton, will resign as head of the Diocese of Scranton next week, sources within the diocese confirmed to the local press today.

The sources did not explain the reason for the 62-year-old bishop’s decision.

The sources also did not specify if the Bishop’s resignation was going to be presented or if it had been already submitted and accepted by the Vatican.

When asked by CNA to confirm Bishop Martino's resignation, diocesan spokesman William Genello said that the diocese will hold a press conference next Monday for media members only.

According to Canon law, a Bishop can present his resignation to the Holy Father for reasons other than the age limit (75), but he remains the head of the diocese until his resignation is accepted.

Speculation about the bishop's future began earlier this week when the local press in Scranton reported that his belongings were being moved from the rectory of St. Peter's Cathedral, to a retreat house in Dalton, Pa.

Joseph Martino was installed as the ninth bishop of the Diocese of Scranton in October, 2003, and rapidly became one of the stronger pro-life voices in the U.S. episcopate.

In a pastoral letter issued last year before the presidential election, Bishop Martino wrote, “To begin, laws that protect abortion constitute injustice of the worst kind.