After Kennedy's Death: Silence from the Pope 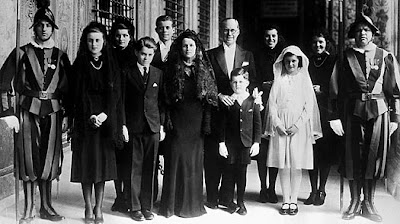 There was a poignant footnote to President Obama's historic July 10 meeting with Pope Benedict XVI at the Vatican.

Behind closed doors in the papal library, Obama handed Benedict a letter that Senator Edward Kennedy had asked him to personally deliver to the Pontiff.

White House spokesman Robert Gibbs later told reporters that nobody — not even the President — knew the contents of the sealed missive.

Obama asked Benedict to pray for Kennedy and called the ailing Senator afterward to fill him in on his encounter with the 82-year-old Pope.

The letter, most likely already resealed and tucked away in the Vatican archives, was probably just a dying Catholic's request for a papal blessing. In the eyes of the traditionalist wing of the Church, however, Kennedy should have been asking the Pope for forgiveness.

The Vatican's official newspaper L'Osservatore Romano reported Kennedy's death, praising his work on civil rights and fighting poverty, but noted that his record was marred by his stance on abortion. As of yet, unlike some other world leaders, Pope Benedict has not commented or issued an official communiqué in response to Kennedy's death.

The niceties of international diplomacy do not require the Pope to issue a statement on the death of a non-head of state. But observers point out that the Papal Nuncio to the U.S. delivered a letter to family of the Senator's sister, Eunice, the day after she died earlier in August, saying the Pope was praying for her, her children and her husband.

One veteran official at the Vatican, of U.S. nationality, expressed the view of many conservatives about the Kennedy clan's rapport with the Catholic Church: "Why would he even write a letter to the Pope? The Kennedys have always been defiantly in opposition to the Roman Catholic magisterium." (Magisterium is the formal term for the authority of Church teaching.)

During Benedict's 2008 trip to the U.S., there was some heated debate — with conflicting photographs and eyewitness accounts — about whether Kennedy took Holy Communion at the papal Mass at Nationals Stadium in Washington, with conservatives insisting that the Pope says the rite should be denied to prochoice politicians.

With this in mind, Church observers are keen to see if Boston's Archbishop Cardinal Sean O'Malley will preside over Kennedy's funeral. Some conservatives already see the fact that the rites are not being held in a cathedral (but rather at the Senator's favorite church) as significant.

For four decades Ted Kennedy remained the nation's most prominent Roman Catholic politician, as well as brother of America's first and only Catholic President. Ted Kennedy received his first Communion directly from Pope Pius XII, and his marriage in 1958 was performed by Cardinal Francis Spellman, the influential Archbishop of New York.

His mother Rose once reportedly said that she'd dreamed that her youngest son would become a priest rather than a politician, destined to ultimately rise to bishop status.

Edward Kennedy, it can be said, was not cut out for the priestly life. His first marriage, to former model Virginia Joan Bennett, ended in divorce in 1982, with the marriage annulled by the Roman Rota more than a decade later. And there are the infamous episodes in his life that showed a man not quite in control of his demons.

But ultimately, beyond his personal travails, Kennedy's relationship with the Church hierarchy was destined for conflict because of politics. The Senator became both the face and the engine of the liberal wing of the Democratic Party that has long led the battle for abortion rights, stem-cell research and gay marriage, all of which Catholic doctrine strictly forbids.

"He is a complicated figure," says the Rev. James Martin, a Jesuit priest and the culture editor of the Catholic magazine America. "Catholics on the right are critical because of his stance on abortion. Catholics on the left celebrate his achievements on immigration, fighting poverty and other legislation that is a virtual mirror of the Church's social teaching."

Back at headquarters, however, there is little room for nuance. "Here in Rome, Ted Kennedy is nobody. He's a legend with his own constituency," says the Vatican official.

"If he had influence in the past, it was only with the Archdiocese of Boston, and that eventually disappeared too."

Some say the final sunset on the Kennedy name within Catholic halls of power was the Vatican's decision in 2007 to overturn the annulment of the first marriage of former U.S. Representative Joe Kennedy, the eldest son of Robert Kennedy. The successful appeal by Joe Kennedy's ex-wife Sheila Rauch, an Episcopalian, was another blow to the Kennedy image in Catholic circles.

In what may mark the final flicker of Kennedy influence in American Catholicism, reports circulated last spring that Obama was considering JFK's daughter Caroline Kennedy as the possible next U.S. Ambassador to the Vatican. That was not to be.

Indeed, in the wake of Uncle Ted's death came word Thursday that Obama's final choice had arrived in Rome to take up the diplomatic post at the Holy See.