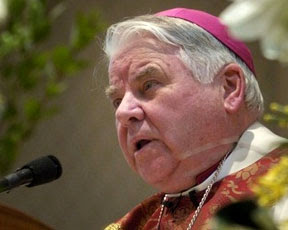 Bishop John M. D'Arcy, whose diocese encompasses the University of Notre Dame, is not letting the issues raised by the university's honoring of President Obama lie dormant.

Instead, the Bishop of Fort Wayne-South Bend has penned a poignant article for the upcoming edition of America magazine that calls on the renowned university to evaluate the consequences of its failure to respect the authority of the bishops.

In an article that will be the cover story of the Jesuit-run America magazine on August 31, bishop D’Arcy writes that "as summer plays itself out on the beautiful campus by the lake where the young Holy Cross priest, Edward Sorin, C.S.C., pitched his camp 177 years ago and began his great adventure, we must clarify the situation that so sundered the church last spring: What it is all about and what it is not about."

According to the bishop, who had asked Notre Dame's president, Fr. John Jenkins, not to honor Obama, "it is not about President Obama... It is not about Democrats versus Republicans… It is not about whether it is appropriate for the president of the United States to speak at Notre Dame or any great Catholic university on the pressing issues of the day."

The real question posed by the situation is whether or not a Catholic university has a responsibility to give a public witness to the faith, D'Arcy states. "If not, what is the meaning of a life of faith? And how can a Catholic institution expect its students to live by faith in the difficult decisions that will confront them in a culture often opposed to the Gospel?" he wonders.

"In its decision to give its highest honor to a president who has repeatedly opposed even the smallest legal protection of the child in the womb, did Notre Dame surrender the responsibility that Pope Benedict believes Catholic universities have to give public witness to the truths revealed by God and taught by the church?" the bishop also asks.

Bishop D’Arcy then takes Notre Dame to task for its multi-year sponsorship of the play "The Vagina Monologues."

"Although he spoke eloquently about the importance of dialogue with the president of the United States, the president of Notre Dame chose not to dialogue with his bishop on these two matters, both pastoral and both with serious ramifications for the care of souls, which is the core responsibility of the local bishop," he says.

"Both decisions," Bishop D’Arcy reveals, "were shared with me after they were made and, in the case of the honorary degree, after President Obama had accepted."

Noting that he has "never interfered in the internal governance of Notre Dame or any other institution of higher learning within the diocese," D'Arcy explains that "the diocesan bishop must ask whether a Catholic institution compromises its obligation to give public witness by placing prestige over truth."

"The failure to dialogue with the bishop brings a second series of questions," he says.

"Or is the bishop the teacher in the diocese, responsible for souls, including the souls of students—in this case, the students at Notre Dame? Does the responsibility of the bishop to teach, to govern and to sanctify end at the gate of the university?"

"In the spirit of Ex Corde Ecclesiae," he says, "I am proposing these questions for the university."

Bishop D’Arcy then points to the strong spiritual life of many of the faculty members and students at the university, and acknowledges that "the theology department has grown in academic excellence over the years, strengthened by the successful recruiting of professors outstanding in scholarship, in their knowledge of the tradition and in their own living of the Catholic faith."

"Yet," he adds, "the questions about the relationship of the university as a whole to the church still stand, and what happened on campus leading up to and during the graduation is significant for the present debate about Catholic higher education."

Regarding the large number of students and faculty opposed to Obama's commencement address and honoring, the bishop says that America magazine "and others in the media, Catholic and secular, reporting from afar, failed to make a distinction between the extremists on the one hand, and students and those who joined in the last 48 hours before graduation. This latter group [ND Response] responded with prayer and substantive disagreement. They cooperated with university authorities."

"In this time of crisis at the university," he notes, "these students and professors, with the instinct of faith, turned to the bishop for guidance, encouragement and prayer."

Although he had originally intended to stay away from the graduation ceremony, Bishop D'Arcy writes that "As graduation drew near, I knew I should be with the students. It was only right that the bishop be with them, for they were on the side of truth, and their demonstration was disciplined, rooted in prayer and substantive."

Bishop D’Arcy also takes aim at the university's board of trustees for saying "nothing" when they met in April for their long-scheduled spring meeting.

"When the meeting was completed, they made no statement and gave no advice. In an age when transparency is urged as a way of life on and off campus, they chose not to enter the conversation going on all around them and shaking the university to its roots," he says.

What the board must do is "take up its responsibility afresh, with appropriate study and prayer… with greater seriousness and in a truly Catholic spirit," the bishop urges.

D'Arcy concludes his article by posing some key questions to Notre Dame "and to other Catholic universities."

"Do you consider it a responsibility in your public statements, in your life as a university and in your actions, including your public awards, to give witness to the Catholic faith in all its fullness?

"What is your relationship to the church and, specifically, to the local bishop and his pastoral authority as defined by the Second Vatican Council?

"Finally, a more fundamental question: Where will the great Catholic universities search for a guiding light in the years ahead? Will it be the Land O’Lakes Statement or Ex Corde Ecclesiae?"

The Land O’Lakes Statement was signed in July 1967 by a group of Catholic educators led by then University of Notre Dame president Fr. Theodore Hesburgh. The famous Catholic historian Philip Gleason characterized the statement as a "declaration of independence from the hierarchy," adding that it divorced the Catholic university from the life of faith and set in motion the decline in Catholic identity of several major institutions of higher education.

Bishop D’Arcy describes the statement as coming "from a frantic time, with finances as the driving force. Its understanding of freedom is defensive, absolutist and narrow. It never mentions Christ and barely mentions the truth."

"The second text, Ex Corde Ecclesiae, speaks constantly of truth and the pursuit of truth. It speaks of freedom in the broader, Catholic philosophical and theological tradition, as linked to the common good, to the rights of others and always subject to truth."

This is a typical US hierarchial trick when they are incapable (intellectually or otherwise) of dealing with serious issues.

When in wonder
When in doubt
Run in circles
Scream and shout.

D'Arcy and his ilk are, at best, pathetic.