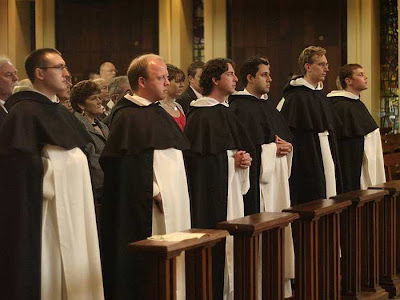 In an intake of novices not seen in Ireland since the early 1980s, 13 men will join the Dominicans this month.

The news follows the announcement this week that 38 new Irish seminarians will begin studies for the priesthood this year, the highest number since 1999.

The Dominican novices will bring the number of men in training to become Friars for the Order to 21, defying a two-decade decline in vocations to religious orders.

The group, who will begin seven years training in the formation house in Limerick next month, represents the largest number joining the Dominicans, also known as the Order of Preachers, since a similar spike in 1986, when 12 men joined.

The novices, aged between 21 and 52, come from a variety of professional backgrounds including a pharmacist, accountant, archaeologist and teacher.

Although the number is unprecedented it reflects the ongoing success of the order in attracting new vocations in recent years.

Vocations Director, Fr Gerard Dunne, said two to three novices, on average, were entering formation every year, with only 10 per cent of those dropping out before final profession.

Fr Dunne attributes the success to the order's prioritising of recruitment. ''We decided nine years ago to focus on vocations as a priority,'' he told The Irish Catholic.

Meanwhile, the 48 men who are beginning studies for the diocesan priesthood represent 15 of Ireland's 26 dioceses. In some cases, dioceses have new seminarans after more than a decade without a clerical student.