Families are “fertile ground” for priestly vocations, says the Pope 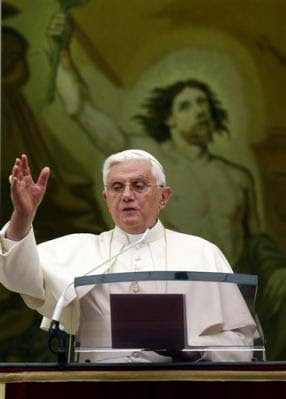 “When husband and wife devote themselves generously to the education of their children, guiding and steering them towards the discovery of God’s loving plan, they prepare the spiritually fertile ground from which vocations for the priesthood and consecrated life spring and mature. This shows how closely tied and mutually enlightening marriage and virginity are, beginning with their joint rootedness in Christ’s nuptial love,” said Benedict XVI during his reflection before today’s Angelus in Castel Gandolfo.

The Pontiff said that in this ‘Year for Priests’ we must pray so that “through the intercession of the Saint Curé d’Ars, Christian families may become small churches, and every vocation and every charism, given by the Holy Spirit, may be welcome and valued.”

In order to highlight the importance of family education in stimulating vocations for the consecrated life, Benedict XVI gave as an example the life of Saint Monica, Saint Augustine’s mother, whose liturgical memories were celebrated in the last few days. Saint Monica is in fact viewed as a “model and matron for Christian mothers.”

“A lot of information about her is provided by her son in his autobiographical book, the Confessions, one of the most read masterpieces of the ages. In it we learn that Saint Augustine drank the name of Jesus with his mother’s milk and that he was educated in the Christian religion by his mother, and that its principles remained with him during years of spiritual and moral disorientation. Monica never stopped praying for him and his conversion, and was rewarded for this when he came back to the faith and was baptised. God answered the prayers of this holy mother, to whom the bishop of Thagaste said: ‘it is impossible that the son of these tears should perish.’ In fact, not only did Saint Augustine convert, but [also] chose to lead a monastic life and, upon his return to Africa, founded a community of monks. In a quiet house in Ostia (Italy), the final spiritual exchanges between him and his mother —who was waiting to return to Africa— were moving and uplifting. For her son Saint Monica had become ‘more than a mother, the source of his Christian faith.’ For years her one wish was to see Augustine convert, and now she could see him even consecrate his life to the service of God. She could thus die a happy woman, which occurred on 27 August 387 AD, at the age of 56, after she asked her children not to worry about her burial, but to remember her, wherever they were, on the altar of the Lord. Saint Augustine used to repeat that his mother had ‘generated him twice’.”

The history of Christianity, the Pope stressed, “is marked by countless examples of holy parents and truly Christian families, who accompanied the life of generous priests and pastors of the Church.” As an example, in addition to Basil and Gregory of Naziansus (4th century), who came from a “family of saints”, the Holy Father mentioned Luigi Beltrame Quattrocchi Mr and his wife Maria Corsini, who lived from the late 19th century till the middle of the 20th, both of whom were beatified by John Paul II in October 2001.

After the Marian prayer, Benedict XVI said that in Italy ‘Save Creation Day’ will be celebrated on 1 September this year; its theme, “air, an element indispensable to life.” He explained that working on behalf of the environment is ecumenically significant because it is an issue that fruitfully brings together Catholics, Orthodox and Protestants.

“As I did during the general audience last Wednesday, I urge everyone to do more for the protection of God’s gift, Creation. In particular I encourage industrialised countries to work together responsibly for the future of the planet so that the poorest populations are not the ones to bear the heaviest burden for climate change,’ he said.
+++++++++++++++++++++++++++++++++++++++++++++
Disclaimer