War of words between Vatican and Berlusconi clan heats up 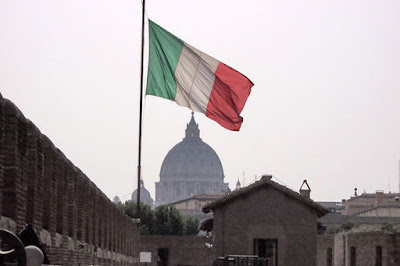 A war of words between the Roman Catholic Church and Silvio Berlusconi's clan heated up Saturday as reports said the row had led to the Vatican cancelling a meeting between its number two official and the Italian prime minister.

The reports said the Vatican had called off the talks scheduled for late Friday after the newspaper headed by Berlusconi's brother Paolo attacked the boss of the Italian Catholic bishops' daily, Avvenire, a persistent critic of the prime minister's sexual peccadillos.

Il Giornale had earlier Friday accused Avvenire head Dino Boffo of hypocrisy, referring to a case in which he had allegedly pestered a woman in 2001-2002 to leave her husband, with whom he was in a gay relationship.

"I reiterate my entire esteem and confidence, as well as that of all the Italian bishops and the Christian community in the director of Avvenire," he told journalists in the northern port city of Genoa, where he is archbishop.

In several editorials Avvenire has called on Silvio Berlusconi to show more "seriousness" and attacked his "penchant for young budding actresses."

Friday's meeting between Berlusconi and Pope Benedict XVI's top aide, Cardinal Tarcisio Bertone, at L'Aquila, scene of April's devastating earthquake, had been seen as a chance for the premier to do some fence-mending with the Church.

The story dealt with possible mafia infiltration into Italian government circles and quoted an alleged conversation about the prime minister between two female members of his cabinet.

Ghedini, a member of parliament for Berlusconi's right-wing People of Freedom Party, also said the British press were being targeted, while refusing to name any paper in particular.

British newspapers have had a field day in recent weeks with stories about the 72-year-old premier, who has singled out for blame his media rival Rupert Murdoch, owner of the London Times and Sky Television, which has an Italian offshoot.

Berlusconi "wants it acknowledged that he has suffered from a libellous campaign by the foreign press with serious consequences internationally," Ghedini said.

On Friday the left-leaning Italian daily La Repubblica said Berlusconi was suing it for a million euros for alleged defamation after it ran a series of stories about his love life.

"For the first time in the history of news in Italy, a newspaper's questions will come before a tribunal," La Repubblica said, referring to its daily list of queries directed at the flamboyant premier over a slew of sex scandals that have dogged him for months.

In particular, the newspaper has pressed Berlusconi to explain his relationship with Noemi Letizia, an aspiring model who has claimed to call him "Daddy" and whose 18th birthday party he attended in April.

La Repubblica raised the ante after a high-end prostitute claimed that she spent the night with the prime minister at his Rome residence.

While acknowledging that he is "not a saint," Berlusconi, a notorious playboy, has repeatedly denied having inappropriate relationships with under-age girls.

The millionaire media magnate has also distanced himself from Il Giornale's attacks, saying in a statement that respect for private life was sacred.

In June Ghedini said he was suing the Spanish daily El Pais for publishing pictures of topless women and a naked man sunbathing at Berlusconi's villa in Sardinia.