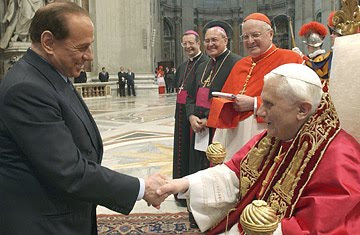 Relations between Silvio Berlusconi and the Catholic Church sank to a new low after a high-profile dinner between the Italian prime minister and the Vatican's second most senior figure was cancelled.

Church officials were said to have gone “ballistic” over an attack by a newspaper owned by Mr Berlusconi’s family against the editor of a Catholic daily, Avvenire, who has criticised the prime minister over his eye for showgirls and starlets.

The cancellation dashed Mr Berlusconi’s hopes of a rapprochement with the Church, which has repeatedly criticised the 72-year-old premier’s moral conduct.

The 11th hour cancellation appeared to be linked to a stinging attack by Il Giornale, which accused the Catholic editor Dino Boffo of being “bereft” of morals and hypocritical in writing editorials about the sex scandals the prime minister has been embroiled in over recent months.

Mr Berlusconi was due to have taken part in a religious service for the remission of sins in L'Aquila, the mountain town which was devastated by an earthquake in April. He was supposed to have participated in the service alongside the Vatican's secretary of state, Cardinal Tarcisio Bertone, who is second in seniority only to Pope Benedict XVI, and then attend a dinner with him.

But less than three hours before the events were due to take place, and despite weeks of planning, the Vatican announced that it was cancelling them.

Mr Berlusconi's office then said he would not be going to L'Aquila at all.

His participation had raised eyebrows because he was due to attend with his equal opportunities minister, Mara Carfagna, a former glamour model.

The Church anticipated added embarrassment over the fact that as a Catholic who has divorced and remarried, Mr Berlusconi is not supposed to receive Communion.

The Vatican said it had cancelled the dinner because it felt the money would be better spent helping victims of L'Aquila's earthquake.

But Church sources said the real reason was that Vatican officials "went ballistic" over the fact that Mr Boffo had been subjected to such a personal attack by Il Giornale, which is controlled by Mr Berlusconi's brother.