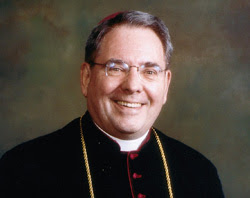 The Catholic bishops of New Jersey have distributed a letter explaining Church teaching on marriage and refuting the errors of same-sex “marriage” proponents.

Urging the faithful to “protect and promote” marriage, they discussed the God-given natural complementarity of the union of man and woman.

“As Catholics, we must not stand by in silence in the face of the many challenges that threaten marriage and, in turn, children and the public good. We must not shirk from our responsibility,” the bishops’ message begins.

Parish priests throughout the state were directed to distribute the bishops' letter, titled “The Call to Marriage is Woven Deeply into the Human Spirit,” in parish bulletins last Sunday, The Newark Star-Ledger reported.

The bishops of Metuchen, Trenton, Camden, and Paterson were signatories to the message, as were Archbishop John J. Myers of Newark and Bishop William Skurla of the Byzantine Catholic Eparchy of Passaic.

In their letter, the bishops noted a “broad cultural shift” away from religion and social traditions and towards “secular individualism.” They described some states’ recent recognition of same-sex “marriage” as an expression of this cultural trend.

“We must protect and promote marriage,” the bishops continued, saying Catholic teaching on marriage and the complementarity of the sexes is a truth “evident to right reason” and recognized by the world’s major cultures.

Explaining Catholic teaching on marriage, they noted that God made man male and female.

“Man and woman are different from each other but created for each other. This complementarity, including sexual difference, draws them together in a mutually loving union that always should be open to the procreation of children.”

The Catholic Church’s concern about the state’s definition of marriage involves marriage’s nature as a “foundational good.”

The government has a duty to reinforce and protect marriage, and should not “attempt to redefine it arbitrarily for transitory political or social reasons,” the bishops said.

Civil authorities, the Catholic prelates noted, are charged with protecting children and the common good, and marriage is indispensable to both purposes. As citizens, Catholics have the right and the responsibility to hold civil authorities accountable for their stewardship of the institution of marriage.”

The bishops also warned of laws and policies that “unjustly target people as bigots” or charge them with unlawful discrimination “simply because they believe and teach that marriage is the union of man and a woman.”

Reiterating that the fundamental human rights of homosexual persons must be defended, the bishops said it is not unjust discrimination to “treat different things differently.”

“Same-sex unions are not, in fact, the same thing as the union of one man and one woman in marriage. One type of union may ever generate children, the other may never; one type of union respects and expresses the inherent complementarity of man and woman; the other does not.”

Turning specifically to New Jersey concerns, the bishops said that the state’s Civil Union Act already provides “practical rights, benefits, and protections” for non-marital unions. Because of this act, the bishops added, the proposed recognition of same-sex “marriage” is not about benefits and rights but is an attempt to change an “historic structure” in a way that “ignores human nature.”

Noting “this time of strange teaching and conflict over the meaning of marriage,” the bishops called on Catholics to “prayerfully reflect” on the words of Jesus in Matthew 19 about a man and a woman becoming “one flesh.”

Fr. Marc Vicari, vicar for family life in the Archdiocese of Newark, told the Star-Ledger that Catholic teaching “needs to be reinforced often.”

“I don't think people understand what marriage is from a Catholic perspective -- even some Catholics who are getting married,” he said.

This same-old same-old is getting quite boring.

If these bishops really want to "protect" marriage, they would be doing everything they could to outlaw divorce. But, then, that would tick off about 50% of married Catholics who have already experienced either a civil divorce or the church farce called annulment.

As a practising Catholic, happily married for 34 years, I have yet to hear or read any persuasive argument as to why allowing same-sex marriage undermines all marriages.

Gay couples in NJ are NOT looking to celebrate a Sacrament, so please leave us alone to seek and appreciate the FULL civil rights we deserve as committed, faithful couples and parents.