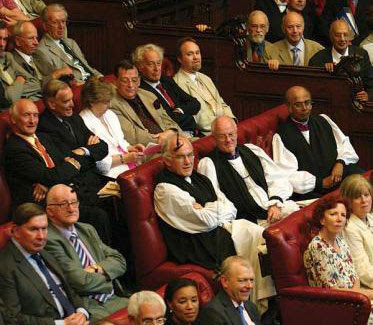 The Church of England has fought back against suggestions that it would give up its seats in the House of Lords without a fight, reports have said.

A spokesman for the Church has told politics.co.uk that such a move would be a “retrograde step”.

The rebuttal has come following comments by the British justice secretary Jack Straw that indicated bishops may no longer be welcome in the House of Lords.

Mr Straw had pointed out to an Unlock Democracy seminar that the exclusive presence of Church of England bishops among Britain’s various religious groups in parliament was “anomalous”.

Although the justice secretary refused to clearly state whether he believed the bishop’s places in the House of Lords should be protected or not, he did talk about his hope for a wholly elected House of Lords.

Mr Straw stated that he hoped such a transition could be possible over three parliamentary cycles. He said, “My own guess is the Church of England may come to a view [over the next ten years] that it is not appropriate for bishops to be in the legislative chamber.”

“The Church has been consistent in challenging the case for a wholly elected chamber and in arguing that if there is a move to a partly elected chamber, bishops should remain, albeit in reduced numbers if the size of the second chamber is substantially reduced.”

The ‘Lords Spiritual’ are the 26 bishops of the Church of England who serve in the House of Lords.

The Lords Spiritual, who sit as crossbenchers, do not normally vote on matters of law or state in the House of Lords, but they have done so in special cases, such as during the passage of the Parliament Act 1911.