Sen. Kennedy’s letter to Pope said he fell short but ‘tried to be a faithful Catholic’ 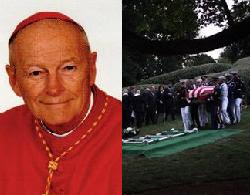 In his private letter to Pope Benedict XVI, Sen. Edward M. Kennedy said he “fell short” as a faithful Catholic.

According to excerpts read at his funeral, the late Senator wrote before his death that though he had “fallen short,” he had always believed in the teachings of the Catholic Church.

The abridged version read by the cardinal, who is a friend of the Kennedy family, began: “Most Holy Father, I asked President Obama to personally hand deliver this letter to you. As a man of deep faith himself, he understands how important my Roman Catholic faith is to me, and I am deeply grateful to him.”

“I hope this letter finds you in good health. I pray that you have all of God’s blessings as you lead our Church and inspire our world during these challenging times.”

In the letter, Sen. Kennedy asked the Pope “with deep humility” to “pray for me as my own health declines.”

“I was diagnosed with brain cancer more than a year ago, and, although I continue treatment, the disease is taking its toll on me, the Senator explained. “I am 77 years old and preparing for the next passage of life.”

The Senator also wrote about the Catholic faith of both of his parents.

“That gift of faith has sustained, nurtured and provided solace to me in the darkest hours,” he wrote.

In the letter, Sen. Kennedy also described how he had tried to connect his faith with his political actions.

“I want you to know, Your Holiness, that in my nearly 50 years of elective office, I have done my best to champion the rights of the poor and open doors of economic opportunity. I’ve worked to welcome the immigrant, fight discrimination and expand access to health care and education. I have opposed the death penalty and fought to end war. Those are the issues that have motivated me and been the focus of my work as a United States Senator.”

“I also want you to know that even though I am ill,” the letter continued, “I am committed to do everything I can to achieve access to health care for everyone in my country. This has been the political cause of my life.”

In the excerpts read by Cardinal McCarrick, the letter makes no reference to the Senator’s militant political positions contrary to core Catholic teachings such as the sanctity of human life from conception and the sanctity of marriage. Sen. Kennedy was a staunch advocate of legalized abortion, embryonic stem cell research and same sex “marriage.”

Regarding proposed health care reform, Sen. Kennedy wrote: “I believe in a conscience protection for Catholics in the health care field and will continue to advocate for it as my colleagues in the Senate and I work to develop an overall national health policy that guarantees health care for everyone.”

On a more personal level, the Senator recognized in his letter that “I have been an imperfect human being, but with the help of my faith, I have tried to right my path.”

“I have always tried to be a faithful Catholic, Your Holiness, and though I have fallen short through human failings, I have never failed to believe and respect the fundamental teachings. I continue to pray for God’s blessings on you and our Church and would be most thankful for your prayers for me.”

Cardinal McCarrick also read during the Rite of Committal the response to the Senator’s letter from a Vatican official, who confirmed that “the Holy Father has read the letter which you entrusted to President Barack Obama” and informed the Senator that “His Holiness prays that in the days ahead you may be sustained in faith and hope, and granted the precious grace of joyful surrender to the will of God our merciful Father.”
+++++++++++++++++++++++++++++++++++++++++++++
Disclaimer