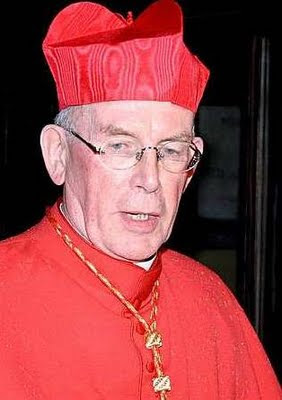 This talk that the institution of marriage would be somehow devalued by making it available to gay people is ridiculous.

Surely the value of a heterosexual couple’s marriage is defined by the effort and commitment that they put into it rather than by the mere fact of their being married?

AS IF the Government did not have enough problems, the Catholic Church’s Cardinal Seán Brady has thrown down the gauntlet to it over its plans to introduce civil partnerships.

In a speech he delivered in Limerick last weekend, Brady claimed the Government’s long overdue plans to give legal and civil recognition to same-sex couples, which is due to be introduced by way of Dáil legislation before the end of the year, "will hugely change peoples’ concept of the family.

Nevertheless, marriage between a man and a woman will always remain the ideal environment in which to raise children. Any government that undermines such an environment could hardly be said to be promoting the common good".

Brady cited Pope Benedict, noting the pontiff has "recently called on governments to enact policies that protect marriage. He wants governments to do what they can to keep the family intact and safe from destruction. It is a family based on marriage, marriage between a man and a woman, which is the vital cell of society. I repeat that call of Pope Benedict because this is one of the fundamental choices that Ireland has to make, and make soon".

Brady ratcheted it further by claiming "there are times when we have to choose either to stand clearly on the side of Christ, or depart from him. This can come about not only in moments of personal crisis but also at certain moments in the life of an entire society".

Brady’s speech got little enough media attention: pronouncements from the clergy do not carry the heft they once did. But it was an interesting intervention because it followed closely the tack taken by the Iona Institute in recent times on this very issue. That lay organisation has lobbied publicly on many social issues, offering non-clerical spokespeople who are highly articulate, in agreement with the church position and who do not suffer from the negative perception that has attached to the Catholic Church because of its involvement in many scandals.

Unfortunately, Brady went to ground after his speech, making himself unavailable for broadcast interview about his views. We made a number of requests from The Last Word but we were told he was away for the week.

This failure to follow through in public may be good news for the Government as Brady’s campaign may not gain any traction.

But there are enough wobbly Fianna Fáil TDs around these days who might capitulate should they be put under pressure at local level. Brady waffled on about politicians following their conscience on the vote on the issue, as if there should be some form of free vote in the Dáil rather than one according to party lines.

Given that the opposition parties can be expected to support the Government’s legislation — even if some may feel it does not go far enough in conferring rights to unconventional couples — such opposition is unlikely to have much impact, but it is disappointing that the Catholic Church is advocating such an approach.

Brady sought to raise a good old-fashioned scare by suggesting that a registrar of marriage who has a crisis of conscience over officiating at a civil ceremony between a gay couple would be guilty of an offence once the new legislation is introduced.

"This is an alarming attack on the fundamental principle of freedom of religion and conscience," he said.

He raised another hare by claiming the legislation "leaves the door open for individuals and religious organisations to be sued in a variety of ways for upholding their belief that marriage is an institution exclusively for a man and a woman."

This raises a few issues. Brady should acknowledge there is a clear distinction between a religious marriage and a civil one. The idea that a registrar of marriage should take it upon himself to decide that somebody is unsuitable to declare commitment to a partner on the basis that they are of the same gender is repugnant, especially if the State has introduced laws to allow for it. Such a registrar deserves to be fired if he refuses to uphold the laws of the State: it employs him, not the church.

And why is it that Brady, the Iona Institute and others are so determined to deny the rights of civil partnership — which fall short of full marriage — to those of the same sex?

This talk that the institution of marriage would be somehow devalued by making it available to gay people is ridiculous. Surely the value of a heterosexual couple’s marriage is defined by the effort and commitment that they put into it, rather than by the mere fact of their being married?

There are plenty of heterosexual couples, even though married, who, for all sorts of reasons, do not do well as parents. What arrogance suggests these people are automatically better parents than gay couples who bring up children in a loving home, just because they are members of a formal and recognised heterosexual marital union?

How is that any heterosexual marriage, good or bad, is apparently in any way devalued by the fact that another couple next door may be gay and are to be allowed the legal protections that are to be afforded by the civil partnership laws?

Surely, we should want legal protections to be given to anyone who is making an honest and committed effort to provide a stable family home, as many gay couples clearly want to do?

Surely, we should be encouraging people who want to make commitments to each other and to whatever families they may have?

There is something insidious behind many of the objections to the idea of civil partnership. Imagine that the State decided to place a ban on mixed-race heterosexual marriages or on the marriages between people of different religious denominations.

Could anyone justify such behaviour?

WHAT is it about some people that having something isn’t good enough for them but they must deny it to somebody else just to protect the apparent value of what they have already for themselves?

Brady is quite entitled to his opinion that heterosexual marriage is best for bringing up a family and many people will share it.

The Catholic Church is quite within its rights to restrict its own sacrament of marriage to those who subscribe to its norms.

But the State has to provide legally for all people of all religions and sexual orientations in a fair way that respects and protects them.

The Government and all TDs must resist the campaign that Brady launched last weekend.

Brady told his audience Ireland must choose between "personal greed or the common good", "reckless exploitation or responsible stewardship" and "a civilisation of selfishness or a civilisation of life".

This article is intolerance in all its aspects. Of decency and morality and more even, of anyone holding deep convictions the writer does not agree with.

It is shallow and petulant and badly argued also.

Thank God for Cardinal Brady - the lack of simple courtesy here is a disgrace - and for the Iona Institute. And for Jesus Who never once supported homsexuality.

Who is life and truth and love.

I don't find this article petulant, shallow or badly argued.

I will agree that referring to "Brady" rather than "Cardinal Brady" is disrespectful and for me detracts from the article's persuasiveness.

However the arguments the writer is putting forward appear to me to be more persuasive that the Cardinal's. Unless the Cardinal can come up with stronger counter-arguments, in my view he is losing the debate.

As indeed his predecessors did in respect of the availability of divorce and artificial contraceptives in Ireland.