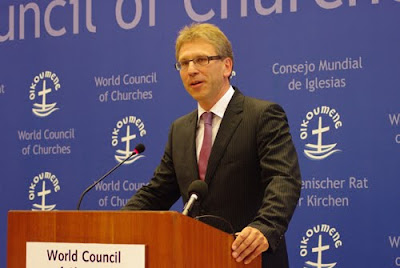 The World Council of Churches has elected the Rev Dr Olav Fykse Tveit to be its new General Secretary.

The vote was made during a closed session at a meeting of the WCC's Central Committee in Geneva on Thursday.

The only other candidate for the position was Dr Park Seong-wan, a professor of Youngnam Theological University and Seminary in Korea and an existing member of the WCC Central Committee.

Speaking to journalists after his election, Dr Tveit said he was "thankful" to become the new WCC General Secretary and expressed his keenness for churches "to find a way to serve the world together".

"I am realistic but optimistic, we have a lot to do together," said Dr Tveit, who has been Secretary General of the Church of Norway's Council on Ecumenical and International Relations since 2002.

He added that it was important for Christians to try to be good neighbours to Muslims.

"I hope the WCC can lead on in strengthening and improving relations between Christians and Muslims all over the world," he said.

WCC Moderator Rev Dr Walter Altmann expressed gratitude to Dr Kobia for serving the member churches of the WCC until now and congratulated Dr Tveit on his new role.

He said: "We know it is a heavy responsibility you take on."

The Bishop of Southwark, the Rt Rev Tom Butler, who is representing the Church of England at the Central Committee meeting, said Dr Tveit's election was a "very positive outcome".

"We had two extremely good candidates from different parts of the world and the outcome has been the appointment of what I would regard as a serious-minded man, who feels in the depth of his being that he is called by God to this ministry.

"Dr Tveit has a good track record of bringing people together and getting them to work together in a positive spirit and I think he has many gifts to bring to the World Council of Churches in difficult days."

He added: "From the Church of England perspective we are very interested in the faith and order work - the WCC's work on the visible unity of the churches - and that is also close to his heart, so we are looking forward to working with him."

Dr Tveit replaces the Rev Dr Samuel Kobia, who is stepping down after six years at the helm of the WCC.

The search for a new General Secretary began last year after Dr Kobia announced at the last meeting of the Central Committee that he would not seek a second term.

The WCC's Central Committee is meeting on Geneva until 2 September. The next major decision to be made concerns the venue of the next WCC Assembly.