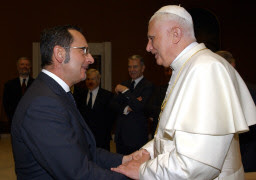 A daily owned by the family of Italian Premier Silvio Berlusconi on Friday accused the editor of the Italian bishops daily of hypocrisy in criticising the premier's allegedly immoral lifestyle.

Under the front-page banner headline The Supermoralist Condemned For Harassment, Il Giornale reported that Avvenire editor Dino Boffo had plea-bargained a 516-euro fine in 2004 for pestering a woman in the winter 2001-2002 to leave her husband, with whom he was in a relationship.

Boffo, 57, who has penned editorials on the premier's friendship with a teenage girl and a prostitute's claims she slept with him, condemned the attack as ''barbaric''. He claimed he had been the ''first victim'' in the phone-call affair.

The Italian bishops association (CEI) issued a statement confirming ''full confidence'' in Boffo and praised him for editing Avvenire with ''indisputable professional ability, balance and prudence''.

The Il Giornale article was accompanied by an opinion piece by editor Vittorio Feltri, entitled Why We Are Unmasking The Moralists.

''With the premise that we have nothing against homosexuals,'' he wrote, ''the fact remains that the editor of Avvenire is not fit to launch furious anathema against other sinners''.

''Boffo has become in the eyes of many people the interpreter of the Church's thinking on the scandal that has been hogging the headlines since the start of the summer,'' said Feltri, whose daily was sold by Berlusconi to his brother after he first became premier in 1994.

''Well, if the bishops have entrusted Boffo with the task of being their spokesman they are way off the mark because...he is bereft of the moral requisites for playing the moralist''.

While Avvenire has voiced unease among the faithful, the Vatican itself has been silent.

But Catholic weekly Famiglia Cristiana, sold in churches every Sunday, has gone further than Avvenire, saying the premier had ''overstepped the bounds of decency'' with his ''indefensible'' behaviour.

MEDIA STORM KICKED OFF WITH TEEN IN MAY

The premier has been at the centre of a media storm that began in May with a public divorce spat with his wife Veronica Lario and allegations of links with a teenage girl - Noemi Letizia - which surfaced after Lario accused him of''consorting with minors''.

At the time, L'Avvenire published a front-page editorial calling for ''a premier who, with sobriety, is able to be the mirror of his country's soul''.

After more recent allegations from escort girl Patrizia D'Addario who said she spent a night with the premier at his official residence in Rome, Avvenire voiced a sense of ''malaise,'' ''desolation'' and ''suffering'' and ran a series of readers' letters voicing their concern over Berlusconi's alleged behaviour.

In his most recent editorial, Boffo accused Berlusconi of ''embarrassing much of the country''.

The Il Giornale attack came on the same day he cancelled a much-anticipated attendance at a high-profile Catholic 'repentance' Mass.

The newspaper's blast also followed Thursday night's news that the premier was suing left-leaning daily La Repubblica for one million euros in damages over questions it has been posing daily on Letizia and D'Addario and a separate article suggesting the premier might be open to blackmail.

Berlusconi's absence from Friday's Mass in L'Aquila was announced by the Vatican, which said he was sending his Cabinet Secretary Gianni Letta in his stead, ''to avoid manipulation''.

Letta has reportedly been working behind the scenes to re-establish good relations between the premier and the Church. The Feast of Forgiveness dates back to when Celestine V was crowned pope in L'Aquila at the end of the 13th century, a period of turmoil when Rome was seen as unsafe for the election.

To mark the occasion a Papal Bull was issued, absolving of their sins anyone who enters the cathedral on August 28.

Berlusconi, 72, has categorically denied any ''steamy or more than steamy'' involvement with teenagers, explaining there was nothing ''spicy'' about his attendance at the Letizia's birthday party because he had a long friendship with her family.

Last week Berlusconi told a celebrity magazine he owns, Chi, that Avvenire had been misled to accept ''lies for truth''.

''I've never had 'relations' with minors and have never organised 'spicy parties'. I've simply taken part in engaging dinners which were absolutely in line with morality and elegance. And I've never knowingly invited anyone to my house who was not a serious person'' the premier told the weekly.

Berlusconi recently admitted that he was ''no saint'' after left-leaning daily La Repubblica and sister weekly Espresso posted audio tapes and transcripts that it alleges are of conversations between the premier and an escort girl on their websites.

After photos of scantily clad guests and a naked man partying at his Sardinian home were published, Berlusconi then found himself embroiled in the escort scandal when D'Addario claimed she and other women were paid by Bari businessman Gianpaolo Tarantini to attend parties at the premier's residences.

La Repubblica and Espresso last month made available tapes of phone calls and conversations she allegedly had at the premier's Rome house which D'Addario said she secretly recorded when she claimed to have spent the night there.

Berlusconi has slammed the press's coverage of the escorts probe as ''just rubbish, just trash'', while his lawyer Niccolo' Ghedini said last month that the recordings were ''without any merit, completely improbable and the fruit of invention''.

Earlier this month, the premier told a news conference he had ''no skeletons in the closet'' and ''nothing to apologise for'' neither to his family or the public.

A poll published by La Repubblica on July 21 said Berlusconi's approval rating fell by four points to 49% in May.

Polling was suspended in June ahead of European elections, where he did less well than expected.