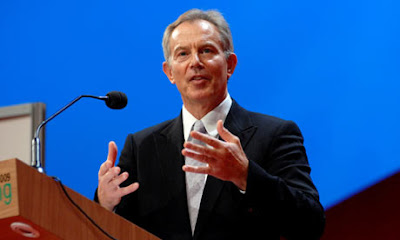 Former PM tells Italian audience that church can make globalisation 'our servant, not our master, lit by God's love and paved by God's grace' Tony Blair said his conversion to Catholicism had been driven by his wife, Cherie, adding that it "felt right" and "is now where my heart is".

The former prime minister, who now runs the Tony Blair Faith Foundation, switched from the Anglican church to Catholicism soon after leaving Downing Street two years ago. His wife and children were already Catholic.

He told the Communion and Liberation meeting in the Italian resort of Rimini yesterday: "Ever since I began preparations to become a Catholic, I felt I was coming home ... this is now where my heart is, where I know I belong."

Blair said he was "humbled" to make a speech to such eminent delegates because he was a "very new entrant" to the Catholic church.

In off-the-cuff remarks reported by the London Evening Standard, he added: "Frankly, this all began with my wife. I began to go to mass and we went together. We could have gone to the Anglican or Catholic church – guess who won?

"As time went on, I had been going to mass for a long time ... it's difficult to find the right words. I felt this was right for me. There was something, not just about the doctrine of the church, but of the universal nature of the Catholic church."

Blair, now also a Middle East quartet envoy, used his speech to tell delegates that it was always a "pleasure" to be in Italy.

"It is here in this country that I have spent many happy times, and where, 30 years ago, almost to the day, I proposed to my wife," he said.

He also spoke of his time as prime minister and, before that, leader of the opposition.

"As prime minister of the UK for 10 years, but also as leader of the Labour party for 13, during which time I reformed its constitution precisely around the relationship between the individual and the state, I learned many things," he said.

Blair reportedly received a standing ovation for his wide-ranging speech, which also included references to past political summits.

"I remember when we put climate change and global poverty on the G8 agenda in Gleneagles in 2005, there was considerable disquiet amongst the politicians, worried about the demands made on them," he said.

"But their burden was lightened by the Christian church giving such solid and clear support.