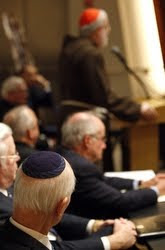 U.S. Jewish leaders have expressed concern over a June statement issued by the U.S. bishops to clarify a 2002 document that raised questions about the church's mission of evangelization and how the church relates to the Jewish community.

In a letter to the U.S. Conference of Catholic Bishops, the leaders said that because of the statement dialogue between the two faiths is at risk.

Representatives of the Anti-Defamation League and the American Jewish Committee and rabbis from various branches of Judaism sent the letter Aug. 20.

They were reacting to a June clarification of a 2002 document called "Reflections on Covenant and Mission," written by participants in an ongoing dialogue between the National Council of Synagogues and the USCCB interreligious affairs committee.

"Catholic-Jewish dialogue has been important to the U.S. bishops for almost 50 years. The U.S. bishops have just received the letter and currently are studying it," Mercy Sister Mary Ann Walsh, director of media relations for the USCCB, said Aug. 21.

In a June 18 note, the USCCB committees on Doctrine and on Ecumenical and Interreligious Affairs said the Catholic section of the 2002 document "contains some statements that are insufficiently precise and potentially misleading."

"'Reflections on Covenant and Mission' should not be taken as an authoritative presentation of the teaching of the Catholic Church," the committees said in their note issued in San Antonio during the bishops' June 17-19 spring meeting.

Of special concern are the document's "description of the church's mission and, in particular, what evangelization means with regard to the Jewish people," the committees said.

The 2002 document also calls interreligious dialogue a form of evangelization that is "a mutually enriching sharing of gifts devoid of any intention whatsoever to invite the dialogue partner to baptism."

"Though Christian participation in interreligious dialogue would not normally include an explicit invitation to baptism and entrance into the church, the Christian dialogue partner is always giving witness to the following of Christ, to which all are implicitly invited," the committees' note said.

The Jewish leaders in their Aug. 20 letter said they interpreted the statement as meaning the bishops view interfaith dialogue as a chance to invite Jews to become Catholic.

They said they do not object to Christians sharing their faith but said dialogue with Jews becomes "untenable" if the objective is to persuade Jews to accept Christ as their savior.

"A declaration of this sort is antithetical to the very essence of Jewish-Christian dialogue as we have understood it," they said in the letter.

In a June news release, the chairmen of the two committees discussed why the note was issued.

"Our most important concern here is a pastoral one," said Archbishop Wilton D. Gregory of Atlanta, chairman of the ecumenical and interreligious affairs committee.

"The 2002 document ... raised many questions among Catholics in the United States about how the church relates to the Jewish community," he added. "Today's statement helps to answer these questions clearly."

Bishop William E. Lori of Bridgeport, Conn., who heads the doctrine committee, said the USCCB "reaffirms what the Holy See has stated repeatedly: that while the Catholic Church does not proselytize the Jewish people, neither does she fail to witness to them her faith in Christ, nor to welcome them to share in that same faith whenever appropriate."