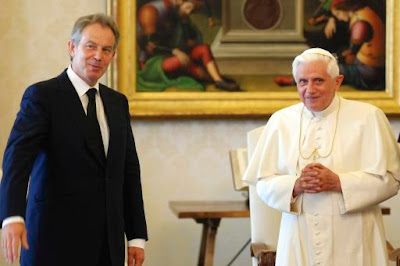 Former British Prime Minister Tony Blair has attributed his conversion to Catholicism two years ago to his wife Cherie.

Mr Blair told a religious conference in Italy: “Frankly this all began with my wife.

“I began to go to Mass and we went together. We could have gone to the Anglican or Catholic church - guess who won?”

Speaking to the Communion and Liberation Committee in Rimini, Italy, Mr Blair said that switching from the Church of England to Catholicism was like “coming home”, and was now “where my heart is”.

According to London's Evening Standard, he said: “As time went on, I had been going to Mass for a long time ... it's difficult to find the right words. I felt this was right for me. There was something, not just about the doctrine of the Church, but of the universal nature of the Catholic Church.”

In his speech, Mr Blair also made a brief reference to his political life in the Labour Party. He said, “As Prime Minister of the UK for 10 years, but also as leader of the Labour Party for 13, during which time I reformed its constitution precisely around the relationship between the individual and the state, I learned many things.