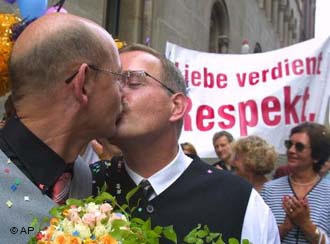 The court decided in favour of a woman in the southern city of Schweinfurt who wanted to adopt the now three-year-old child of her female partner, with the consent of the father and social services.

A lower court had argued that such a move would be unconstitutional because it placed the rights of the partner of a parent above those of a biological parent.

But the Constitutional Court rejected this, saying that "life partners" who assume the role of parents have the right to formalise that role.

"The earlier decision failed to consider the fact that the role of a child's parent is not only determined by his or her biological progenitor but based on the social-familial community caring for the child," the ruling said.

The ruling comes in the wake of a pledge in 2005 by Edmund Stoiber, the premier of the still strongly Catholic state of Bavaria who said that he intended to challenge the German government's attempt to pass a law allowing homosexuals to adopt.

Homosexuals were allowed by a 2001 law to register their liaisons as "life partnerships".

This obscene photo is highly offensive. What is CW descending to?