Why Romero's canonization is stalled (Contribution) 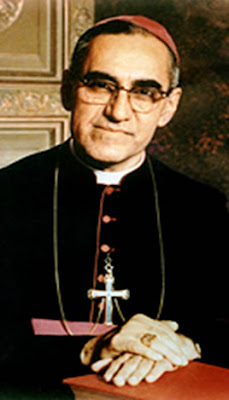 Jon Sobrino, the Spanish Jesuit theologian based in El Salvador, says the delay in the process of beatification of Oscar Romero is essentially political: namely, fear of its impact on the Vatican's relations with the Central-American state.

The martyred Archishop of San Salvador, gunned down at the altar in 1980 after denouncing injustices and army oppression, was formally accepted as a candidate for sainthood in 1997, when he was declared a "Servant of God".

He survived a theological audit by the Congregation for the Doctrine of the Faith in 2005, and there was talk of beatification following swiftly -- especially if he was declared a martyr.

But since then, it's all gone quiet. March next year will be the 30th anniversary of his martyrdom, but there's no sign coming out of Rome that a declaration is being planned.

In an interview with the Spanish press agency EFE in Mexico, where he is attending a congress on a fellow theologian, Ignacio Ellacuria, also murdered in El Salvador, Sobrino said the problem was essentially "political".

A 1993 UN report identified Major D'Aubuisson, founder of the ARENA political party, as the one who ordered Romero's assassination in 1980 -- and therein lies the problem, says Sobrino.

"If they beatify Romero, whether they like it or not all that's going to come out. So it's a big problem for the Salvadoran Government and, I guess, for the public and diplomatic relations between the Vatican and El Salvador".

Can this be true? ARENA is no longer in power -- so what's the fear? That the ruling left-wing FMLN party would exploit the furore to embarrass ARENA? That after all these years the country would erupt in violence?

Sobrino, professor at the Central American University (UCA), fears that, rather than being canonised as a martyr, over time Romero's legacy will be watered down.

Hence the need to redouble efforts to keep Romero's powerful witness alive: this wonderful site on Romero at the Kellog Institute, for example.

Over here in the UK, meanwhile, ROMERO: THE MUSICAL is being performed on 27 September for the first time in a London theatre. It was first put on in 1982 at a Benedictine school, and has been performed at many other schools since. It is fast-paced, with gorgeous music, and brilliantly captures the life and witness of the man known simply as "monsenor".

I know this first hand, because I acted in that first production -- as an American TV interviewer (doubling up as, um, a member of D'Aubisson's death squad). It was a huge hit at the time.

Maybe part of the reason his canonization is being stalled is because Pope Benedict XVI(Joseph "the Rat" Ratzinger) has a hard time canonizing the person whose blood is on his hands. How did Ratzinger respond when Romero made his plea for attention to the situation? He told him to shut up and not make waves.

Card. Ratzinger had no such interaction with Romero, nor any that has been documented. Lamentably, the Servant of God Romero was assassinated in 1980. Card. Ratzinger was Archbishop of Munich and Freising and had no responsibility over Romero. He was elevated to Prefect of the Sacred Congregation for the Doctrine of the Faith in November 1981, well after Archbishop Romero was killed.