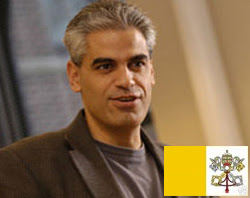 Thursday morning Dr. Miguel Diaz arrived in Rome with his family to begin serving in his new position as the U.S. Ambassador to the Holy See.

Ambassador-designate Diaz said that he and his family are looking forward to the coming weeks and that he hopes to "deepen and expand upon the special relationship" between the U.S. and the Vatican.

Prior to leaving the U.S. he was sworn in as ambassador on August 21 in Washington D.C., the U.S. Embassy to the Holy See said in a statement.

"I look forward to the coming weeks as my family and I put down new roots in Rome. I will be honored to serve President Obama and the American people in my new role, and it will be a unique honor to meet his Holiness, Pope Benedict XVI," Ambassador-designate Díaz said.

Since President Ronald Reagan established formal diplomatic ties with the Holy See in 1984, the two states have worked together on a host of shared priorities, including religious freedom, inter-faith dialogue, peace and security, trafficking in persons, the environment, human rights and global health.

"I welcome the opportunity to deepen and expand upon the special relationship that has evolved between the United States and the Vatican over the past 25 years of formal diplomatic ties," Ambassador-designate Díaz added.

According to diplomatic protocol, Diaz will not assume his full responsibilities until he presents his letter of credentials from President Barack Obama to Pope Benedict XVI on a mutually agreed upon date.