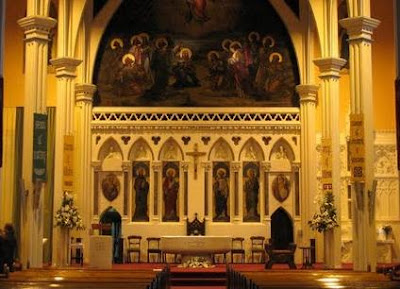 Well holy God as Miley was wont to say but things have taken a rather ridiculous turn down in the Banner county, and Ennis Cathedral in particular.

It seems that a female lay reader caused near scandal and palpitations amongst those who seemed to be more interested in her apparel than in the message from the scriptures she was to read.

Such was the anguish and gnashing of teeth amongst some that it managed to make it on to the airwaves and thereby gain a whole new lease of life for itself.

The poor priest on the altar, Fr Martin BLAKE, was almost lambasted for having allowed such defilement of the sanctuary and sacred space but of course this was proclaimed whilst he was not around to defend himself.

Hypothetically, if he had refused the lady it would be a whole different ball game and story indeed along the lines of priest refuses shorts woman to read scripture and he would be classed as being discriminatory or sexist or some other such stupid labelling.

But, what really needs to be taken into account here is the following:

* female wore shorts to church, knowing she was doing reading so it is upon her to decide what she wears but doing so whilst being considerate of where she will be doing so from;

* those in the pews should be far leas concerned with the shorts than with the message which was obviously enough to detract them from hearing the Word of God, thereby questioning their concentration upon such a message of Christ;

* those who call themselves such good concerned Catholics / Christians who feel this is of such importance (which it is - to a degree!!) should have approached those concerned afterwards - in a nice calm Christian way - and let the priest also know of your unhappiness and / or concerns

It never ceases to somewhat anger me how good Catholics are to condemn, bitch and backstab others behind their backs, and even in public but never to their faces!!!

Well, now they have had their moments, let them reflect on whether they acted properly in this particular regard (no doubt they will feel they have) and ask themselves is this how Christ would have behaved?

We should consider ourselves lucky to have the involvement of the laity, but perhaps it is upon us as well to somewhat advise against wearing anything that will cause such obvious furore but we must also presume that does who do volunteer are also mature enough to realise themselves what is and is not acceptable.