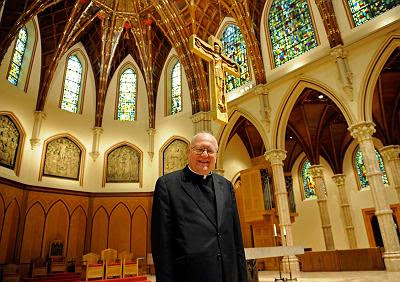 If Rev. Dan Mayall had his way, the calendar might just skip the month of February.

In February 2008, structural weakness caused a 10-pound piece of decorative wood to tumble from the ceiling at Holy Name Cathedral, where Mayall is the pastor.

The church — the seat of the Roman Catholic Archdiocese of Chicago — closed for six months.

In February 2008, structural weakness caused a 10-pound piece of decorative wood to tumble from the ceiling at Holy Name Cathedral, where Mayall is the pastor. The church — the seat of the Roman Catholic Archdiocese of Chicago — closed for six months.

In February 2009, the cathedral’s roof caught on fire, causing widespread damage throughout the sanctuary.

On Saturday, after another six months of repairs, the cathedral at 735 N. State reopens for Mass once again, with extensive work having been done to the damaged wood ceiling.

The ceiling, said Mayall, “has never looked this good. It’s spectacular and it’s meant to inspire.”

When the scaffolding fell in 2008, Mayall led a church-wide fund-raiser to pay for repairs.

After the 2009 fire, he pitched to the wider community, noting that two-thirds of Holy Name’s attendees at Sunday aren’t parishioners.

Two million dollars in pledged donations came in, from Chicago and beyond.

A Protestant church on the city’s South SIde contributed.

The Catholic cathedral in St. Paul, Minn., took up a collection.

More than 1,000 people, including Mayor Daley and Cardinal Francis George, attended a fund-raiser for Holy Name at the Palmer House Hilton, which donated its services.

Mayall estimated that damage from the two incidents cost about $14 million. He’s hoping fire insurance will cover $6 million. The fire’s cause still has not been determined.

While scaffolding outside the church will remain in place through November, the sanctuary will be open for this weekend’s Masses, five baptisms and two weddings.

Weekday Masses will continue to be said in the parish center due to construction noise for at least the next few weeks, he said.

Abigail Schmitt and fiancee Ryan Flanagan weren’t sure if the church would be open for most of their engagement. In April, she learned will be walking down Holy Name’s aisle on Aug. 29, just like her sister did in January 2008. Her sister was married in the short window when the church was open, between when the falling wood repairs were completed and the fire.

Schmitt said she’s excited that they both were able to marry in a “landmark of Chicago.” She said her parents have been listening for construction updates at Mass.

“We were trying to be easygoing about the situation,” Schmitt said, adding that, around the time of the fire, “We also had the caterer go bankrupt.”