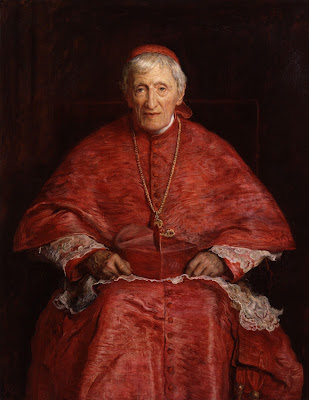 Catholics are accustomed to hearing about miracles and people being cured through the intercession of the saints, but today's materialistic culture often looks on this with scepticism.

British author John Cornwell has a book on Cardinal John Henry Newman coming out at the end of May, and the Sunday Times recently gave him a lengthy space to voice his doubts about the validity of the miracle that was approved by the Vatican as the basis for Newman's beatification this coming September.

In his May 9 piece Cornwell states that the Vatican documentation of the miracle "enters the realms of astonishingly arcane medieval language and mindset."

Cornwell then proceeds to cast doubt on the medical reliability of the cure, not forgetting to add in for good measure numerous sweeping criticisms of Benedict XVI.

Cornwell is not alone in casting aspersions on the use of miraculous cures. Last December, after Rome announced the approval of the miracle required for the canonization of Australia's Sister Mary Mackillop, a medical specialist in Sydney, David Goldstein, expressed his doubts.

In an article published Dec. 22 in the Australian newspaper, he said that it is impossible to determine if improvements in patients were the result of prayers.

The Anglican bishop of North Sydney, Glenn Davies, was also critical, according to a Dec. 24 report in the Australian. "Who can prove that the reported miracles were actually the work of Mary McKillop?" Bishop Davies asked.

Fortunately, a handy guide to dealing with these and similar objections was published last year by Jacalyn Duffin, a physician who holds the Hannah Chair for the history of medicine at Queen's University, Ontario, Canada.

In her book "Medical Miracles: Doctors, Saints, and Healing in the Modern World" (Oxford University Press), she examined 1,400 miracles cited in canonizations from 1588 to 1999.

Her curiosity about miracles was sparked by being asked to examine tissue samples she subsequently found out were part of a canonization process. On receiving as a present a copy of the "positio," the documentation of the miracle, Duffin suddenly realized that such files must exist for every canonized saint.

During several stays in Rome she researched hundreds of these records. Duffin calculated that she was able to review from a third to a half of all miracles deposited in the Vatican archives since the rules governing canonizations were laid down in 1588.

The new regulations that were part of the Counter-Reformation reforms required careful gathering of evidence and a scrupulous examination of the material by medical and scientific experts. Paolo Zacchia (1584-1659) played an important part in formulating the guidelines, Duffin explained.

In his writings he presented an explanation of the different types of miracles and defined that for a healing to be deemed miraculous it should be of an incurable illness and the recovery should be complete and instantaneous. Duffin noted that medical experts working for the Vatican continued to cite Zacchia until well into the 20th century.

Some criticize physical healings as the basis for declaring saints, but Duffin commented that the need for credible evidence pushed the selection process toward healings as there could be independent witnesses, including doctors.

Over time there were changes in some of the modalities of the canonization process, but considering the records of the last four centuries, Duffin declared that she was impressed by the remarkable stability in the commitment to science.

In fact, the Church has consistently relied on a scientific scepticism to test the validity of the miracles. In the records of the miracles that Duffin examined she found that clerics readily deferred to the opinion of scientists. The religious authorities withheld a judgment of supernatural activity until they were convinced that the experts were prepared to label the events as inexplicable.

"Religion relies on the best of human wisdom before it imposes a judgment from inspired doctrine," Duffin stated.

One point that she added to this relationship between religion and science was that religion tends to more comfortable with science than vice versa.

In the processes some physicians were discomforted, as if their cooperation would constitute a betrayal of their commitment to the idea of Western medicine that rejects the proposal that diseases or cures are of divine origin.

Duffin noted that in the 19th century, Catholics and Protestants argued over the matter of whether an absence of an explanation for a cure does really mean that the event is a miracle. That debate continues, she added, as when one of her colleagues explained that while we may not know the natural explanation, one must exist.

But, Duffin objected, such an attitude does not really address the most crucial question when it comes to medical miracles. The positivist attitude that refuses to accept miracles takes the position that if something is wondrous we must reject it as an illusion or lying, because there is only the natural world. Such confidence in a natural explanation is, in fact, a belief masquerading as fact, Duffin argued. In other words, to assert that a miracle simply cannot occur is no more rational and no less than an act of faith than is the assertion that miracles can happen.

The difference between the religious and positivist approaches lies in the interpretation of the evidence, Duffin commented. The medical canon is immersed in an antideistic tradition, while for religion all plausible scientific explanations must be eliminated, after which they are prepared to declare a miracle.

In both approaches what is left is that which is unknown, but the religious observers are prepared to accept divine agency.

While some may refuse to admit the possibility of divine intervention, the Catholic Church is certainly careful to utilize all of medicine's resources so as to eliminate any natural explanations of cures. In one of the book's chapters Duffin examined the use of medical knowledge in the canonization process.

For a start, the Vatican does not recognize healing miracles in people who have refused orthodox medicine to rely solely on faith. The intervention of doctors provides objective medical evidence that avoids any possible manipulation of the case in question.

In her studies of the files, Duffin found that the predominance of testimony by doctors increases through time. The files she reviewed showed that in the 17th century an average of one doctor was named in each record, but only a small proportion of them gave evidence in person. After 1700, however, at least a third or more of the physicians mentioned in a record provided testimony in person.

In the second half of the 17th century, the evidence of the physicians treating the patient was supplemented by independent medical observers. Eventually the number of expert doctors consulted increased until it matched or even surpassed the attending physicians.

Duffin also pointed out that the Church does not rely exclusively on Catholic doctors. The inquiries examined the faith of all witnesses, doctors included.

As prior to the 20th century, most of the miracles came from European countries where the majority of the doctors were Catholic.

Many, nevertheless, admitted they did not regularly practice their faith, and a couple had even been excommunicated. None, however, were disqualified from being witnesses.

In more recent times doctors who were of other faiths, or who openly profess to be of no religion, have testified.

In the end a miracle is only declared when the doctors are prepared to admit their own ignorance as to how a person recovered when the best scientific medicine failed.

An admission that the contemporary mentality of pride in modern knowledge and science finds hard to make.