Madrid cardinal calls on priests to be 'ministers of authentic joy' 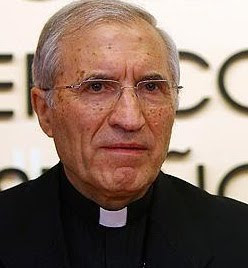 The Archbishop of Madrid and president of the Bishops’ Conference of Spain, Cardinal Antonio Maria Rouco Varela, praised the “great service” of priests around the world, “especially in these times marked by discouragement, skepticism and sadness.”

The prelate then encouraged them to be “ministers of authentic joy.”

During Mass at the Cathedral of Toledo for the 10th National Eucharistic Congress, Cardinal Rouco said, “We must spare no effort in encouraging priestly vocations and underscoring to the faithful the true meaning and necessity of the priestly ministry.”

“We must not forget that the security of man to draw near the true altar of God depends decisively on the priestly ministry that takes place in the Church as Eucharistic ministry,” the cardinal said.

He reminded priests during the Mass that with prayer, “The Christian communities we serve become authentic schools of prayer, as John Paul II desired and requested.”

He called the Eucharistic Congress “a new invitation to give thanks to God for our ministry and for the supreme gift of the Eucharist that we must embrace with devotion.”