Time to move forward for the Church (Contribution) 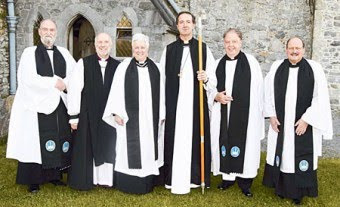 Just last Friday Kilkenny made history when the Church of Ireland installed the first ever female Dean of Ossory at St Canice’s Cathedral.

The Very Rev Katharine Poulton now holds the prestigious position and resides here in Kilkenny at the deanery.

It was a big day for the COI community and the ceremony was fittingly prestigious.

I think we will be waiting some time however, before women get these kind of opportunities in the Catholic church.

This is a terrible shame, as our country is currently a predominately Roman Catholic country and at the rate that we are losing our priests and the lack of new potential priests entering the seminary, we are soon going to be priest-less if we let the situation continue.

So what is the answer?

Are women priests the way forward in the Catholic church?

Is the idea so way out there?

Unfortunately our Pope seems to think so. However, maybe it is time for the Catholic authoritarians to move with the times - most of our modern day priests have, so why shouldn’t those in charge. Gone are the days of Orthodox religions - they are not tolerated in this modern society in which we live any more.

In any case orthodox religious beliefs have often led to fundamentalism and this is certainly not something that is good for any country.

Fundamentalists are responsible for some of the biggest wars that this society has ever witnessed.. but I digress.

The bottom line is that if Catholicism doesn’t move with the times, it may well become extinct.

We need to look at ways of increasing an interest in Catholicism rather than dictating out-dated rules to the congregation which ostracised large proportions of the community.

There are many priests in Irish society who sincerely believe that women priests would be an asset to the Irish Catholic church and furthermore would agree that the right to wed should also be legalised.

Priests have traditionally led lonely lives and we have seen horrendous outcomes of this void that has been in their lives since the publication of the Murphy and Ryan Reports.

However, if there were opportunities for women to become priests and for priest to wed, we might avoid a lot of the issues that arose in the dark past of the Catholic church.

Healthy, loving relationships should be embraced for what they are in any shape or form in the eyes of the church, but this is not always the case.

The Catholic church opposes gay marriage and the social acceptance of homosexuality and same-sex relationships, but teaches that homosexual persons deserve respect, justice and pastoral care.

That’s all well and good but it still means that the church does not accept them fully and so where do these people fit in in terms of their religion?

The Catholic church really does have a long way to go.

It has come a long way in the last century - for example, contraception is now available freely which is probably the most liberating part of women’s lib considering that up until some years ago a man could have sexual intercourse with his wife whether she wished to or not and it was never considered rape.

As we can see the church has come a long way - and clearly for the betterment of society - so why stop now?

Change is not necessarily bad and generally is good.

If we want to keep our religion alive - we must take that one small step for ‘man’ which we hope will lead to one giant leap for mankind.