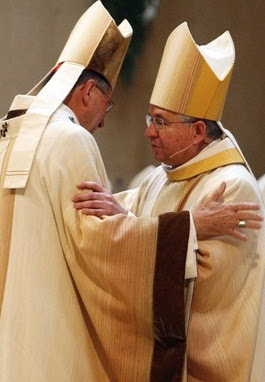 Los Angeles officially welcomed its next Roman Catholic archbishop Wednesday with a celebratory Mass that included a bit of just about everything: tears, drama, majesty, song, hats, incense, a cast of thousands, prayer and even a little slapstick humor.

At the end of the two-hour service at the Cathedral of Our Lady of the Angels in downtown Los Angeles, the outgoing archbishop, Cardinal Roger Mahony, told the incoming archbishop, Jose Gomez, that church rules demand that the ceremonial throne for the prelate "must be fitting." Mahony then invited Gomez to try it out for size.

A bemused Gomez approached the large wooden chair, began to sit, hesitated, looked askance, then finally plopped down. "It's kind of big," he said, "but I think I can make it."

At that, the audience of about 4,000 — including seven cardinals and, by official count, 59 bishops and 411 priests — erupted in cheers, laughter and hearty applause.

Gomez, a Mexican-born cleric who has served since 2005 as archbishop of San Antonio, will take the reins of the nation's largest Catholic archdiocese in February, when Mahony is expected to retire on his 75th birthday.

Until then, Gomez will serve as coadjutor archbishop, which means that he will train alongside Mahony, who has been the head of the church in Los Angeles since 1985.

It has not always been an easy run for Mahony, a leader of progressive Catholics nationally whose church has weathered a devastating sexual abuse scandal that ultimately led to a $660-million settlement for victims of abusive priests. There was no mention of that Wednesday, but there was a sense that the archdiocese might be turning a page from a sometimes difficult era.

"As I near the end of my time of tending this corner of the vineyard, the shepherd's staff is being passed to Archbishop Gomez," Mahony said in his homily. "Mahony goes; Gomez comes. Christ alone endures."

As he often does, Mahony delivered his remarks in both English and Spanish, an acknowledgement of the tide of immigration that has transformed — and, many would say, revitalized — the church in Los Angeles. In choosing Gomez as Mahony's successor, Pope Benedict XVI presumably was recognizing that demographic shift.

The Vatican was represented at the Mass by Cardinal William Levada, a Long Beach native who is the chief doctrinal official for the church. Also in the audience was Cardinal Juan Luis Cipriani of Lima, Peru, a controversial prelate who is said to be a close friend of Gomez. Cipriani, who has clashed with human rights groups in Peru, is the first Catholic cardinal to be trained by the theologically conservative Opus Dei organization, which also trained Gomez.

Gomez spoke near the end of the Mass, joking that the assemblage was getting "two homilies for the price of one.... It's a good deal."

Turning serious, he appeared to stand up for undocumented immigrants when he said, "God is with us, and in his loving eyes, no one is a stranger for him, and no one is an alien for any of us." He noted the diversity of the audience, made up of representatives of all 288 parishes and every major Catholic organization in the archdiocese.

"In the community of cultures here in Los Angeles, we can see what it means to say that our church is 'catholic,' " he said, referring to the word's definition as "universal."

"My sisters and brothers, I have so much to learn about this extraordinary family.... I have only just begun, and I'm going to need your prayers and assistance … and most of all, your patience."

He exhibited surprising fluency in the local argot, declaring at one point: "I cannot believe I am here, my friends. This is awesome!"

Switching to Spanish, he addressed his own family, including his four sisters, who came from Monterrey, Mexico. Speaking of his late parents, he had to halt briefly, and resumed with a catch in his throat.

After the ceremony, Gomez stood at the head of a receiving line in the courtyard outside, accepting greetings and hugs from his new flock.

"It's so astounding to be here," said Jose Moreno, 27, of La Puente, who attends St. Joseph Catholic Church and came to the Mass with his wife, Veronica.

Veronica Moreno, 28, called the Mass "beautiful … very welcoming and joyous." Both said they were thrilled by the selection of Gomez.