Old Buffalo church to be reborn in Atlanta suburb 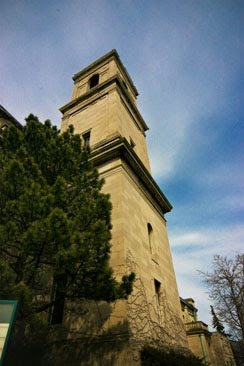 For decades, countless people from Buffalo have made the move from Rust Belt to Sun Belt.

Maybe it was only a matter of time before one of its buildings would follow.

A Roman Catholic parish in the affluent northern suburbs of Atlanta has begun raising $16 million to import, piece by piece, a closed Buffalo church.

The 99-year-old St. Gerard's would get a second life as Mary Our Queen in Norcross, an up-and-coming parish that has outgrown the 600-seat sanctuary that opened a dozen years ago.

Supporters see it as "preservation through relocation" of a unique structure that already shows signs of deterioration since it was closed in January 2008 as part of a diocese-wide restructuring.

While a dozen other vacant Catholic churches in Buffalo have been reincarnated as housing, office space or houses of worship by other religions, there had been no takers for St. Gerard's, occupying half a city block in a bereft neighborhood. Then came the Rev. David Dye's offer to buy it, with the condition he take it with him to Georgia.

"When we closed, all I could see was the church standing here deteriorating or being used for not the right kind of purpose," said parishioner Richard Ciezki, a former trustee who for years pulled the ropes to ring St. Gerard's three bells before each weekend Mass.

"It's like an organ transplant," explained Dye. "You don't want someone to die but if they are dying, it would be nice if their organs were reused and they lived again in a sense through that donation."

Not everyone is ready to pull the plug.

The idea of moving St. Gerard's out of Buffalo has angered the city council, which has begun amending city law so that a preservation board would have to review any proposal to move out property.

"It's not right. You can't strip-mine a city's historic heritage," said Council President David Franczyk, who is unwilling to say that his city's decline, marked by steep manufacturing and population losses, is permanent.

"Just because Buffalo is down on its luck, we shouldn't blow a hole in the streetscape in an impoverished neighborhood," he said.

Built by Italian immigrants and modeled after St. Paul Outside the Walls, a Renaissance-style basilica in Rome, St. Gerard's was closed as the Diocese of Buffalo restructured in response to a shrinking number of Catholics. There were 950,458 Catholics in the eight western New York counties in 1971 and 656,750 today. St. Gerard's parish had 1,600 families in the 1960s, and only 100 or so when it merged into Blessed Trinity Parish.

Buffalo is not alone in realizing that descendants of the Catholic immigrants who landed in Northeast and Midwest urban centers are not staying put, either moving to the suburbs or other regions altogether, said Dr. Mary Gautier of the Center for Applied Research in the Apostolate at Georgetown University.

As parishes in Allentown, Pa., Camden, N.J., Boston and Cleveland have closed churches, Sun Belt parishes in Austin, Tex., Los Angeles and Atlanta have been "bursting at the seams" with transplants and an influx of Hispanic residents, Gautier said.

Walking through the mothballed 12,000-square-foot Buffalo sanctuary, the Rev. Francis "Butch" Mazur recalled how he encouraged worshippers at St. Gerard's farewell service to line up to kiss the white marble altar before leaving.

It was a rare full house, with former parish members coming mostly from the suburbs to say goodbye.

Outside, the group stared at the church's limestone exterior, soaring 110-foot belltower and the three pairs of arched wooden doors through which they had passed as brides and grooms, First Communion recipients, mourners of lost loved ones.

"I slammed the door shut and I turned the key and we sang a song and nobody moved. It was a rainy day and everybody stood there," Mazur said.

"It was sad knowing the doors would be closed forever and we'd never be able to get back in," recalled Lisa LaCerais Spada, who attended the parish school and now lives in suburban North Tonawanda.

But since that day, some of the interior ceiling plaster, disintegrated by a leaky roof, has snowed down upon unoccupied oak pews and the water creep has warped wood near a side entrance.

"I'm not at all interested in plundering Buffalo," said Dye, "But the truth of the matter is that otherwise, St. Gerard's is not going to survive."

Mary Our Queen members are energized.

"It's like waiting for Christmas," declared Patricia Di Rito, who said the churches built in the Atlanta area in the last 50 years "don't have the beauty" of many churches in the Northeast.

"The Civil War destroyed everything," she said.

Rodney Cook, president of the National Monuments Foundation, called the idea of moving the church "the cutting edge of preservation in America today."

"If we continue to let buildings that fine linger unused, they're doomed for collapse and that's a tragedy all the way around," he said.

Franczyk laments taking St. Gerard's out of its architectural context and dropping it 900 miles away, into a sprawling suburb with exclusive country clubs and upscale shopping. Norcross, once a tiny 19th-century railroad stop, is now home to thousands of corporate transplants living in rambling executive colonial homes with manicured lawns.

"Where they want to take that church is no place for a 1912 building replicating an ancient church from Europe," Franczyk said. "There's no place for it in that kind of milieu."

Once gone, he said, it can never be replaced.

The new, more modern churches going up today have nowhere near the opulence.

Mary Our Queen is a two-story, utilitarian structure that opened in 1998 in a commercial area along a busy highway. Parish spokesman Philip Hauserman said it was built in anticipation of being used as a social hall or possibly as a gymnasium.

St. Gerard's would be deconstructed from the roof down and rebuilt from the bottom up, with a new foundation, new structural walls and reproduced plaster work.

There are bound to be some glitches, perhaps foreshadowed by the move of an 8-foot statue of St. Gerard from the Buffalo church to Mary our Queen this past Easter. The 1,600-pound statue fell as it was being removed from a crate and its head broke off.

Was it a sign that St. Gerard did not approve of the move? Franczyk wondered.

Dye, who had the statue promptly repaired, saw it differently.

"His head falling off is a sure and certain sign that he wants the church built there, since he was martyred, in a sense, a second time," the priest said, "in Atlanta."