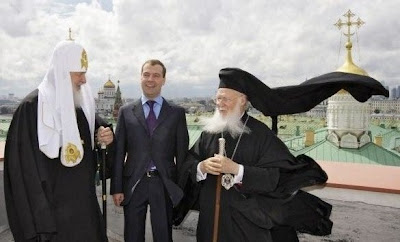 Relations among the Orthodox have improved after past strains when churches in Estonia and Ukraine broke away from the Russian mother church and tried to pledge allegiance to the patriarch in Istanbul.

"The visit of your holiness is a significant event and, beyond all doubt, it will help strengthen the dialogue which always linked the two sisterly churches," Medvedev told Bartholomew, the ecumenical patriarch of Constantinople, according to a transcript published by the Kremlin.

Russian Orthodox Patriarch Kirill has assigned a high priority to improving interfaith relations since his election last year. Church sources say dialogue with the Roman Catholic Church has improved markedly and a historic meeting between Pope Benedict and Kirill is now a prospect.

Medvedev said Bartholomew's visit was "especially important, taking into account the fact that Russia is a country where the majority of the population is Christian Orthodox in its faith."

The size and growing political clout of the Russian church, which has strong backing from Medvedev and Prime Minister Vladimir Putin, contrasts sharply with Bartholomew, who has a tiny flock and is under severe pressure from the Turkish authorities.

Turkey refuses to recognize Bartholomew's full title and has kept his church's main seminary in Halki closed despite pressure from the European Union and U.S. President Barack Obama.

Addressing Bartholomew, Medvedev stressed "the constructive and fully-fledged dialogue between the Russian Orthodox Church and the state … that allows us to tackle very hard tasks."

Underlining his status as Orthodox leader, Bartholomew replied: "We, as the mother church, are glad about this success and harmony, about these kind relations of cooperation which exist between the state and the Russian Orthodox Church."

Kirill, who leads the biggest of the Orthodox churches with 160 million believers, visited Bartholomew in 2009 to show his interest in improving relations.

Greeting Bartholomew in Moscow, Kirill has shown deference to his guest and even personally translated his address from Greek into Russian for the congregation during a solemn service in Moscow's gold-domed Christ the Savior Cathedral.

The previous day, the two church leaders led a procession of roughly 40,000 through central Moscow to commemorate Cyril and Methodius, the missionaries who brought Orthodoxy to the Slavs in the ninth century and devised the Cyrillic alphabet.

Amid the signs of mutual respect, it was unclear whether the two sides discussed the contentious issue of breakaway Orthodox Churches in Ukraine and Estonia.

Religion experts said that the significance of Bartholomew's visit to Moscow could not be overestimated.

"This is an extraordinary visit," said Father Mark Arey, of the Greek Orthodox Archdiocese of America, an expert on relations between Moscow and Constantinople.

"It signals a real synergy for world Orthodoxy and shows they [the patriarchs] are working toward solutions of the problems they have."