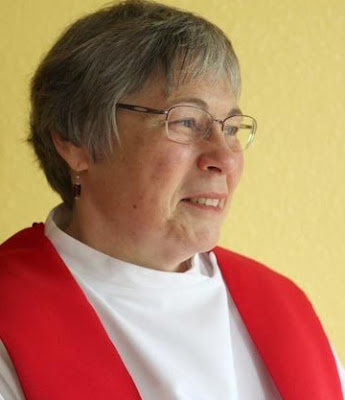 Diane Whalen, 58, a spiritual director, wife and mother of two, was ordained last Saturday in a ceremony attended by about 300 people at Longhouse Education and Cultural Center at The Evergreen State College.

The ordination is considered invalid by the Roman Catholic Church, which does not recognize Womenpriests as a Catholic organization.

Under canon — or church — law, only men can be ordained; church teachings say that's because Jesus chose only men as his apostles.

A 2008 Vatican decree automatically excommunicates women who attempt ordination and the people who attempt to ordain them.

Most of the sacraments the women perform — such as hearing confession, celebrating Mass and anointing the sick — would be considered invalid by the Roman Catholic Church.

Womenpriests, which was founded about eight years ago, has some 75 ordained female deacons, priests and bishops in the U.S. — including several in Oregon; and a total of about 110 worldwide.

Greg Magnoni, spokesman for the Seattle Archdiocese, declined to comment on Whalen's ordination, other than to say he doesn't consider her organization to be a Catholic group and "I just couldn't comment on the practices of other religious groups or faith traditions."

Whalen, who says she has felt a call to the priesthood since high school, acknowledges her ordination breaks church law.

But she considers her ordination valid because she was ordained by a female bishop in a line that traces back to a male bishop in good standing, whose identity remains secret.

Born into a Catholic family, Whalen remembers wanting to be a nun like her Catholic grade-school teachers — "because I wanted to be close to God."

Eventually, she realized she also wanted to have boyfriends and to marry. She studied religion in college, received a master's degree in ministry and a doctorate in spiritual direction. She worked as a Jesuit volunteer. For some 30 years — up until last year — she was active in her parish in Olympia.

Nearly four years ago, after hearing a female bishop ordained by Womenpriests, Whalen decided to pursue ordination. Since then, she says, she's been surprised at how often she's heard: "We want a woman in leadership."

Serving as nuns or in high-ranking staff positions still doesn't give women as much influence in the hierarchy as ordained men, Whalen says.

"The church is in trouble right now, and we need the wisdom of women," she said. "Unless there's a vehicle for that, that's not going to happen."

Whalen intends to minister to those who feel alienated from the church but want to continue worshipping together as Catholics.

She has met a few times in Olympia with a small group of such people and says she likely will be their priest.