Celibacy: whose bright idea was that? (Contribution) 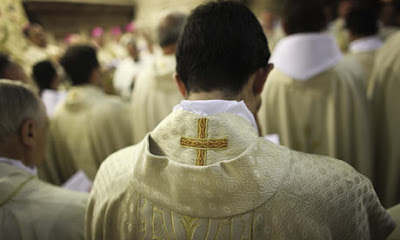 Why does the pope wear underpants in the bath?

Because he doesn't like looking down on the unemployed.

I was always fond of this joke, though never more so than when still at school where – this being a Catholic boarding school – unemployment of this variety was rife (albeit not so rife that there wasn't an occasional visit to the job centre).

When it's not the object of irreverent humour, the vow of celibacy – in effect a vow of chastity – undertaken by the Catholic clergy is an issue of great seriousness.

We were reminded of its seriousness in March, when the occasionally freethinking cardinal of Vienna, Christoph Schönborn, suggested the issue of celibacy should be the object of "unflinching examination" within the church and enforced chastity may be linked with the secretive cultures of sexual abuse being exposed one after the other.

His call was quickly shot down by the Vatican, and Schönborn fell back into line.

But now the humorous side is back on top again, with the report that numerous former mistresses of the Roman clergy recently sent a petition to the pope asking him to reconsider the issue on the grounds that a priest, just like anyone else, benefits from being able "to live with his fellow human beings, experience feelings, love and be loved".

The women of Rome are right, of course, as was Schönborn.

There is simply no question that forcing men and women of the cloth to forego sexual intercourse causes untold problems.

As with any physical or psychological force, hold it back in one place and it will come out somewhere else, most likely causing a good deal more damage on the way.

In Catholic doctrine, the virtue of chastity is taken to be the principal foil to everyone's favourite deadly sin, lust. But whether you take the trouble to read the Freudian literature on repression, or heed the folk observation that "absence makes the heart grow fonder (while total abstinence makes it foam at the mouth)", it's fairly clear that chastity is less of a foil than a fertiliser for lust.

As most of us know, the best and most common way to satisfy a sexual appetite is – surprise surprise – to have sex.

So, the real question is not whether it's a good idea but how on earth it came to be thought a good idea in the first place.

As with much Christian doctrine, the wisdom on celibacy has nothing to do with contemporary accounts of Christ. There are no prescriptions for chastity in the gospels, nor any genuine attempt to pretend that Jesus's various encounters with a certain lady of Magdala were anything other than of the usual kind.

It is also clear that most of Jesus's apostles were married, and that in asking them to follow him, he wasn't asking them to abandon their wives and children.

The first official decrees on the matter don't come until the fourth century. At the council of Elvira in AD306, it was decided that a priest who has sex with his wife is not fit to celebrate mass the following day.

But it wasn't long before the council of Nicea decreed in AD325 that priests should refrain from marriage altogether. Soon after this, women were disbarred from the priesthood, more rot set in and congealed into institutional prejudices against flesh in general, and female flesh in particular, that had their roots not in Christ's teaching or in early church practice, but in the resurfacing, in the form of Gnosticism, of an ancient sceptical dualistic metaphysics which pitted spirit against matter and body against soul.

This, to my mind, has been Christianity's greatest single tragedy, turning a religion founded on a noble and genuine philosophy of love into an excuse for repression, oppression and persecution, in which suffering was turned into a cult and hypocrisy into standard practice.

In the meantime, the ancient conception of Eros as the love that bound sexual partners together no less than it was held to bind the flux of cosmos together was erased, substituted for by the idea of love as agape, or disinterested compassion understood as willing duty to God.

Yet, even though both terms are ancient Greek, it is only in Christian doctrine that they come to be seen as mutually exclusive.

But nowhere do people suffer more than in the church itself.

Comic and tragic anecdotes about the evil effects of celibacy in the church abound. They range from the great raping and pillaging Pope Benedict IX – whose near successor Victor III remembered "his life as a pope so vile, so foul, so execrable", that I shudder to think of it – to the de facto genocide of the Albigensian crusades against the Cathars.

But we can't change history, we ought to be able to change today. Many of the monks I knew fell victim to the absurd demands of the faith in one way or another, paying variously with their vocations, their reputations as excellent teachers or scholars, or – in one case – by taking his own life.

Benedict IX's namesake will not shift on this matter, however; just as he is unlikely to shift on any of the other pointless, detrimental and irrational articles of faith to which the Catholic church clings.

Humour, often the best recourse in intractable situations, comes to our aid again. As someone once said of another infamous ban, on contraception: if you can't play the game, don't presume to make up the rules.