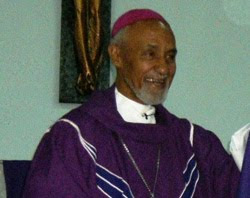 Reacting to deadly violence between security forces and armed supporters of a local drug lord in Jamaica, the Archbishop of Kingston has said most of the country is calm but well-paid gunmen will continue to skirmish with authorities.

He noted in an interview that he has asked all priests and religious in the archdiocese to pray the traditional St. Michael the Archangel prayer.

At least 49 have died in Jamaica’s capital after a Monday police assault on an alleged drug lord’s stronghold in the Tivoli Gardens neighborhood resulted in gun battles in the streets. According to Vatican Radio, soldiers and police stormed the slum in search of Christopher “Dudus” Coke.

Coke’s extradition is sought by the United States on charges of cocaine trafficking and gun-running.

“This country is under siege, and the time has come where it is going to be dealt with and this government is ready to deal with it,'' Information Minister Daryl Vaz said in a nationwide address, according to the Miami Herald.

Archbishop Donald James Reece told Vatican Radio that there is much tension in the area under attack but the rest of the country is “relatively calm.” He voiced concern that the violence could spread to other areas.

“I have communicated to all of our priests, religious and deacons to try and maintain calm, to pray the traditional St. Michael the Archangel prayer,” he reported.

According to the archbishop, the Council of Churches has come out with a statement that the prime minister is no longer able to lead because his credibility has been damaged by “untruths” surrounding the United States’ extradition request for the known drug dealer.

The Jamaican government had claimed for months that the wiretaps cited by the U.S. were illegal, but Prime Minister Bruce Golding abruptly changed his mind on the issue last week.

Vatican Radio asked the archbishop how the Church is involved in helping those affected by drug abuse and drug-related crime.

“We are the only Church that has residence in the conflict area. As a result our men are respected there. We have programs for the ordinary people who live there. The priests who live there are the safest because the gunmen will not bother them, because they identify them as people from their area who give service to them at all times,” he answered.

Archbishop Reece said he has heard that the young men involved in the violence are being paid as much as 100,000 Jamaican dollars ($1,100) per day. He called this “a tidy sum” for them to fight “to the end.”

“That means that they will not capitulate to the security forces, so it could drag on to the bitter end for another week or so,” he lamented.

The security forces are concerned about garrisons in other areas that “tend to be a law unto themselves.” Security forces will target these after the present violence is ended, the archbishop believed.