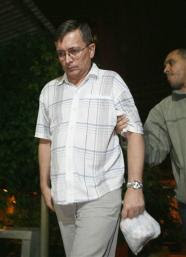 The Rio de Janeiro archdiocese of the Roman Catholic Church said Wednesday that a Polish priest accused of sexually abusing a boy was suspended two years ago when the allegations against him first surfaced.

Adionel Cunha, a spokesman for the church, said a statement released last week indicating that Marcin Michal Strachanowski was suspended after his arrest was ordered last Thursday "was not clear."

"When we heard of the allegations in 2008, the father was automatically suspended of his duties," Cunha said. "That was not clear in the statement."

The allegations are the latest of several priest sex abuse cases in Brazil, which is home to more Roman Catholics than any other nation, and come as the church grapples with scandals around the world.

Cunha declined to provide more details about Strachanowski, such as what he had been doing since 2008 or where he had been living until his arrest.

But one of the priest's lawyers, Hugo Sarubbe, said Strachanowski never changed his address from the parish house where the alleged abuse took place. Sarubbe pointed to that as a reason why the suspect should be released pending trial, saying it proved he didn't pose a flight risk.

Carlos Santoro, another of Strachanowski's lawyers, said the church began canonical legal proceedings against the priest in 2009 that could result in his permanent suspension from the church.

Santoro said Strachanowski's work in Brazil, where he has been since about 1997, involved leading religious study groups for adults.

"He never worked with children or teenagers," Santoro said.