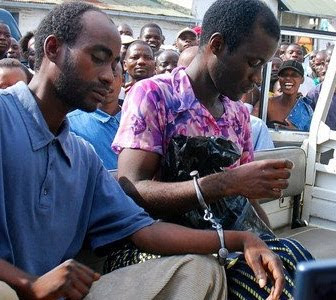 28.12.09 - Steven Monjeza and Tiwonge Chimbalanga arrested for holding a ceremony.

10.01.10 - Steve and Tiwonge refused bail and ordered to stay in Chichiri Prison - where they have been beaten and forcefully examined.

18.05.10 - Steven Monjeza and Tiwonge Chimbalanga have today been convicted of unnatural acts and gross indecency...

We urge the International Community to get behind this decision and appeal it.

Tiwonge told the New York Times "I have male genitals, but inside I am a complete woman. Maybe I cannot give birth to a child, but I menstruate every month – or most months – and I can do any household chores a woman can do."

A Malawian judge has rejected a bail application by two gay men charged with public indecency after getting engaged.

Nyakwawa Usiwa-Usiwa said Tiwonge Chimbalanga and Steven Monjeza would be safer in custody while they wait their trial - expected to start next week.

The pair, believed to be the first gay couple in Malawi to start the process of getting married, pleaded not guilty to the charges last week.

Denying them bail, Mr Usiwa-Usiwa said: "The accused have the right to bail but considering the public interest their case has generated it is the view of the court that they are safer in police custody than out there."

He said the pair would be given bail on 10 January if prosecutors had not finished investigating by then.

The BBC's Raphael Tenthani in Blantyre, where the case was held, says Mr Monjeza looked downcast throughout the hearing and burst into tears when the magistrate remanded them in custody.

At their court appearance last week, the 26-year-old had hinted that he would consider calling off the proposed wedding.

"I am sad I am going back to Chichiri Prison," he said.

"The conditions are terrible there. People are exaggerating this thing. I may just as well dissolve this marriage."

After the latest hearing the pair were surrounded by hundreds of people who were chanting and cheering.

Our correspondent says Mr Chimbalanga, 20, who dresses in women's clothes, acknowledged the crowd with a wave as they shouted: "Aunt Tiwonge, Aunt Tiwonge".

The pair face three charges of unnatural practices between males and gross indecency.

Malawi is a deeply conservative society but recently a group of campaigners came together to form a gay rights organisation, Centre for the Development of People (CEDEP).

CEDEP's executive director, Gift Trapence, says the laws used to arrest the couple are invalid because they are against the Bill of Rights enshrined in the 1995 constitution.

Correspondents say some voices in government have also started to call for more openness about homosexuality as the authorities try to tackle high rates of HIV/Aids.

I am writing to you to urge you to to immediately and unconditionally release Steven Monjeza and Tiwonge Chimbalanga, a couple on trial in Malawi being charged with “unnatural offences” and “indecent practices between males” under sections 153 and 156 of the Penal Code.

The arrest of the couple solely for their real or perceived sexual orientation amounts to discrimination and it is in violation of their rights to freedom of conscience, freedom of expression, and privacy.

Laws criminalising homosexuality criminalise the legitimate exercise of these human rights, which are protected in treaties ratified by Malawi, including the International Covenant on Civil and Political Rights and the African Charter on Human and Peoples’ Rights which oblige Malawi to respect and protect the right to freedom of conscience, freedom of expression and the right to privacy, without discrimination on the grounds of sexual orientation.

I call on you to investigate allegations that the couple were beaten while in police custody and urging you to bring the perpetrators to justice.

Please forward this email to the relevant ministerial department!