Pope: Matteo Ricci brought the Gospel to China and therefore dialogue between cultures 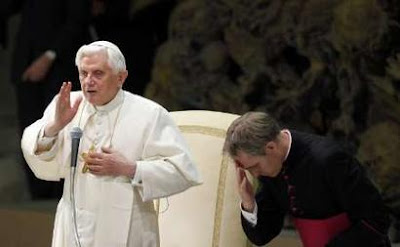 Fr Ricci was primarily a missionary, who went to China to bring the Gospel".

And in doing so he formed an important "dialogue between cultures, between China and the West”.

This is what Benedict XVI said today to a Paul VI Hall packed with thousands of pilgrims from Macerata, birthplace of Matteo Ricci, and Marche, on the occasion of the fourth centenary of the death of the great Jesuit missionary.

Welcoming the bishops and the faithful, the pope also greeted the Chinese with a resounding "Nimen hao" (how are you?).

After noting that Ricci is still held in high esteem in China today, the pontiff said that missionary’s work "must not be separated" from his commitment to "Chinese inculturation of the Gospel Message and his introduction of Western culture and science to China”.

Indeed, many events celebrating the fourth centenary of the death, risked presenting Matteo Ricci, as a mere cultural mediator. "Fr. Ricci - said the pope - went to China not to bring science and Western culture, but to bring the Gospel to make God known”.

He added: "And as he proclaimed the Gospel, Fr. Ricci found in his interlocutors the desire for a wider confrontation, so that a encounter motivated by faith, became a dialogue between cultures, a disinterested dialogue free from the ambitions of economic or political power, lived in friendship, which makes the work of Fr. Ricci and his disciples one of the highest and happiest points in the relationship between China and the West".

Benedict XVI also recalled "the role and influence" that his Chinese friends had in the work of Ricci (Xu Guangqi; Zhizao Li, Yang Tingyun, Li Yingshi): "His choices he did not depend on an abstract strategy of inculturation of the faith, but from all the events, encounters and experiences that he made, so all that he achieved was also thanks to his encounter with the Chinese, an encounter he lived in many ways, but which was deepened through his relationship with some friends and disciples, especially the four famous converts, 'pillars of the nascent Chinese Church'. "

The memory of Ricci and his friends, continued Benedict XVI should be an occasion for prayer for "the Church in China and the entire Chinese people, as we do every year, on May 24, turning to Mary, venerated in famous Shrine of Sheshan in Shanghai, and may they also be an incentive and encouragement to live the Christian faith intensely, in dialogue with different cultures, but in the certainty that in Christ the true humanism is realised, open to God, full of moral and spiritual values and able to respond to the deepest longings of the human soul".

The Pope concluded expressing his appreciation and greeting to China and the desire for a deeper relationship between it and Christianity: "Like Father Matteo Ricci, today I express my profound respect to the noble Chinese people and its ancient culture, convinced that their renewed encounter with Christianity will bring abundant fruits of good, and like then, that it will favour peaceful coexistence among peoples".

SIC: AN
EDITED BY Sotto Voce