‘The Church here is truly remarkable’ 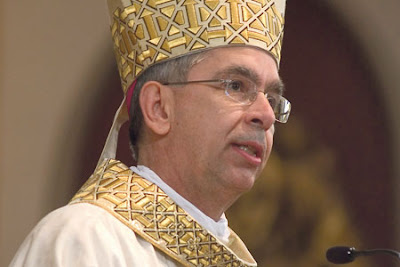 Luke Coppen talks to Archbishop Joseph Marino, the Apostolic Nuncio to Bangladesh who worked for several years in the nunciature in London

When you were appointed Apostolic Nuncio to Bangladesh in January 2008 you were serving at the nunciature here in Britain. One moment you were in London, the next in Dhaka. Did you experience culture shock?

I recall that a Nuncio who sent me a note of congratulations when I was appointed to Bangladesh wrote that I was going to a place many miles from London, and "I don't mean just in distance". Of course, there are many differences between these two great capitals, each offering its own challenges. In the end, we are sent to serve, and a spirit of service requires adaptation to the situation in which one finds himself.

How is your daily routine in Bangladesh different from your life in Britain?

I have now served in five different nunciatures, and I have found that the daily routine is basically the same. The day usually begins with the celebration of the Holy Mass, followed by work in the office. Since the nunciature is a diplomatic representation there are functions of this sort as well. Generally speaking, the routine has been the same.

It may surprise some that the Catholic Church is present in Bangladesh, which has a large Muslim majority. When did Christianity arrive there and how did the Church set down roots?

Christianity arrived in Bangladesh with the Portuguese in 1600. So this moment marked the first moment of evangelisation of this land. Then in the 19th century there was the second wave of evangelisation when British Baptists brought the faith here. In the middle of the 19th century our own evangelisation was undertaken by the Holy Cross missionaries and the PIME Fathers. A third important moment of evangelisation began at around 1950, and its focus was the tribal peoples. It continues today. I must say that the missionaries laid a solid foundation for the life of the Church which today enjoys the ministry of mostly local clergy and religious brothers and sisters.

Last year you attended a three-day celebration marking 50 years of evangelisation in the Hill Tracts region on the eastern border of Bangladesh. This area is home to over a million indigenous or tribal people. What impression did this event make on you?

This celebration was truly impressive and inspiring. The fruits of a deep announcement of the Gospel over these 50 years were so evident. A civil leader who attended the ceremony said: "Those who came with the message of Jesus brought inspiration and have assisted our people in achieving their aspirations, both spiritually and materially. The faith of your people must be great, because you have done so any great things for the poor and forgotten."

I wish to add that this year I attended the 100-year celebration of the evangelisation of the Mandi tribe in Ranikhong. The story of evangelisation here begins with the British Baptist missionaries in the early 1800s. Apparently, in 1909, some lay leaders told their pastor that they wanted more in their faith. It seems that they were told that "if you want the full religion go to meet the Catholic Bishop in Dhaka". So they walked 75 miles to Dhaka and asked the bishop for a priest. Unfortunately, the bishop told them that he had neither a priest nor financial means to open a mission there. But the lay leaders returned to Dhaka when there was a new bishop, who was so impressed by their persistence he sent two priests to open a mission among the Mandi people. Today, the entire tribe is Christian, with 60 per cent Catholic and 40 per cent Protestant. The bishop of the Diocese of Mymensingh, where most of the Mandis live, is from that tribe.

Then this past Easter I had the privilege to dedicate, along with the Archbishop of Dhaka, the new Mission of Divine Mercy in Boroleka, located in the northeast area of Bangladesh. This Mission offers tremendous possibilities for the Church to manifest the mercy and love of God among the tribal people there who have been longing for the nearness of the Church. The new mission already has a rectory for the two priests who will serve there and a multi-purpose building. The next phase is the construction of a school. Can you imagine that there is no school whatsoever in the area?

How would you characterise the Islam that is practised in Bangladesh?

Bangladesh is the first country in which I have lived whose majority population is Muslim, and I must say that I have noticed a people who are proud of the spiritual dimension of their religion. The people of Bangladesh deeply feel themselves to be Muslim with a Bengali culture. Recently I had dinner with a former Minister and during our conversation he spoke about his faith and at one point expressed the hope that God would forgive him for his faults. I stated that God is merciful and would forgive him if he asked. Then he said: "But, Father, maybe you do not know what Islam teaches: namely, if my brother whom I may have offended does not forgive me, then God will not forgive."

What are relations like between Islamic and Catholic leaders?

At present, these relations are very good. There is a deep sense of mutual respect on the level of the spiritual aspects of our respective religions. The bishops' conference commission on inter-religious dialogue has organised, over the past year, many excellent interreligious conferences that were well-received by the Christian, Muslim, Hindus and Buddhist communities.

You know, when I was in the diplomatic school in Rome in preparation for this ministry, one professor told us that, while we may be diplomats, people will first and above all judge us to see if we are good priests. So if we are sent to an economically rich country or a poor one, the basis of our ministry is the same: service to the people. In fact, Pope Paul VI taught that the role of papal representatives is to serve the people, all people, and to promote their spiritual and material well-being.

How can Catholics in relatively prosperous countries such as Britain and the United States help the Church in Bangladesh?

First of all, it is necessary to state that Catholics in these two countries are already expressing Christian charity and assistance through their contribution to Cafod, the Pontifical Mission Societies, and so forth. Last year the Diocese of Westminster allocated a sizeable portion of its Lenten Appeal to the schools initiative underway here. For this generosity, I can assure you that the local Church is extremely grateful as the needs are so great in Bangladesh. In fact, it is in this last area where any assistance is most welcomed. The Church has been involved in education since 1850 and today operates some of the best schools in the country which are open to all peoples. The bishops are now trying to expand this educational network especially in the remote villages where there are no schools at all. At present, 10 new schools have been proposed and some are already under construction, as a result of the generosity of people in the US and Britain. I know that any assistance here would be most appreciated. What do you think is the biggest challenge facing the Catholics of Bangladesh?

I would say that the greatest challenge of the Catholic people is to live as a minority. There are 320,000 Catholics in a country with a population of 150 million people, most of whom are not Christian. And not only that, many of our Catholics come from tribal communities, and so there is a double minority status. Yet, despite this reality, I have discovered our people are very dedicated and committed to their Catholic faith. In many visits to the dioceses and parishes, and this is one of the great joys of being Nuncio in Bangladesh, I have discovered over and over again their deep spiritual devotion, pious celebration of the Eucharist and active charitable activities. Parishes operate schools, clinics, trade formation and hostels for boys and girls, and so on. For such a small community the Church's life is truly remarkable.

What is the most important thing you've discovered so far in your time in Bangladesh?

Without question, one of the most important things that I have discovered is the resilience of Bangladeshi people. Bangladesh is so often hit by devastating natural disasters. Yet the people pick themselves up, rebuild and go forward. Among our own people, I have discovered their desire to contribute to the development of their country as Catholics. They live with a great sense of faithfulness knowing that they are members of a large family under the pastoral care of our Holy Father, Pope Benedict.