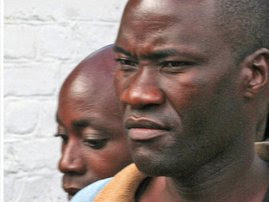 Malawi's president has announced the pardon of a jailed gay couple who were sentenced to 14 years for holding the country's first same-sex wedding.

'I have decided that with effect from today, they are pardoned and they will be released,' Bingu wa Mutharika told reporters after meeting United Nations Secretary General Ban Ki-moon.

'These boys committed a crime against our culture, our religion and our laws, however, as the head of state I hereby pardon them and therefore ask for their immediate release with no conditions,' wa Mutharika said.

Tiwonge Chimbalanga and Steven Monjeza were arrested on 28 December after they got engaged in a traditional ceremony.