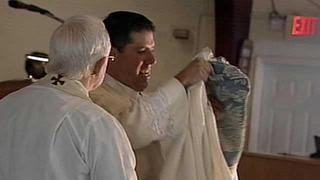 A Miami priest who left the Catholic Church after photos surfaced of him kissing his girlfriend on the beach has been ordained as an Episcopal priest.

Alberto Cutie, known as "Father Oprah," has since married Ruhama Canellis and the two are expecting a baby.

Cutie was removed from his parish last year after the photos were first made public.

He said he met Canellis at church, and the two were friends for years before becoming romantically involved.

Hundreds gathered at an Episcopalian ceremony Saturday marking his return to priesthood. He said the denomination is "welcoming of all."

Cutie's once popular cable television show and advice column have fallen by the wayside since the scandal.

He said many Catholics "act as if I dropped dead, as if I don't exist."