POPE IN CYPRUS: ARCHBISHOP OPPONENTS TO VISIT OUT OF SYNOD 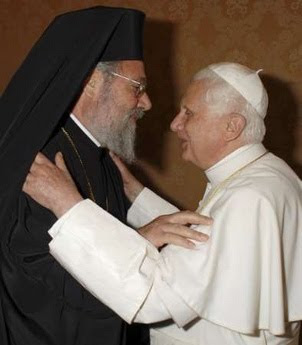 Archbishop Chrisostomos II, Primate of the powerful Greek Orthodox Church of Cyprus, has had enough of those expressing their displeasure at the Pope's visit to the island and in the manner to which he is accustomed has laid down the law.

If they do not change their tune, he will expel them from the Holy Synod - the highest authority of the local church - for one year.

Thus comes the latest development in an affair that has seen at least five high prelates of the Synod and the Primate facing off in the first serious split the high ranks of the Church of Cyprus has seen since the election of Chrisostomos in 2006.

As he has announced to the popular local daily Phileleftheros, Chrisostomos has resolved to bring to their senses (especially the combatant Archbishop of Limassol, Athanasios, who called the Pope ''a heretic'') those who have come out against the arrival of Benedict XVI on the island.

So, the Primate has resolved, whoever boycotts the festivities to welcome the Pope and does not show up at the ceremony in Pafos scheduled for the afternoon of June 4, will be expelled from the Synod for the period of one year.

Although the majority of Cypriots are of Greek-Orthodox faith, the Pope's visit (the first by a Pope in 2,000 years) is nonetheless felt to be an historic event bringing prestige to the whole island, whose press is following any matters related to the Pope's arrival with interest.

And security has become a hot topic ever since the news broke forty-eight hours ago that groups of Greek-Orthodox fanatics might be arriving from Greece to add strong-arm tactics to local demonstrations against the Pope.

This has led the local Cypriot authorities to arrange for strict security to guarantee that the visit goes smoothly, mobilising 400 police officers for the task.

Several ''security areas'' have also been set up around the Pope.

The first of these, called the ''First Zone'' will be the physical space immediately surrounding the Pope, which is to be watched over by his Vatican security staff, the local press say.

Immediately around the ''First Zone'' comes the ''Second Zone'' which will be under the control of dozens of armed anti-terrorist agents (it is not clear whether they will be in uniform or plain clothes) and Cyprus' secret services (the KYP).

To seal the net, select marksmen will be positioned on the rooftops surrounding all the open areas the Pope visits.