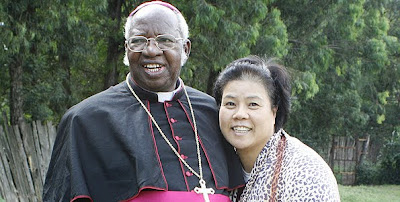 At 80, Archbishop Emmanuel Milingo may be running out of steam.

His walk is a bit laboured and his breath is somewhat raspy.

Some puff also seems to have gone from his cheeks, but his conviction, he says, has never been stronger.

The controversial priest and self-proclaimed healer on Sunday presided over the consecration of two deacons within his Married Priests Now church.

The archbishop, who shot into international fame in 2006, when he publicly challenged the relevance of celibacy in the Catholic Church believes he has fought a good fight and that his years of struggle will soon bear fruit.

“Everywhere I go, I am received with love by people of all faiths. They love and understand what I stand for,” he told the Nation yesterday during the ordination of Victor Kimemia as a deacon.

Mr Kimemia’s faith lies within the African Orthodox Church of Kenya, which does not allow the ordination of married priests.

“God’s word is for all of us. We should not discriminate the married from the unmarried,” argues Archbishop Milingo.

Despite his excommunication five years ago, he says there’s no love lost between him and the Roman Catholic Church.

“They said I came from a family of witchdoctors and that I falsely proclaimed to be a healer. They did not know I talk to God directly,” he told the Nation.

Despite his self-professed love for the Roman Catholic Church, the Archbishop’s public call for an end to mandatory celibacy in 2001, punctuated by his very public marriage to a doctor of acupuncture from Korea, was rejected as an embarrassment.

Upon the insistence of the Vatican, he set aside his marriage and returned to his healing ministry in Italy. His disappearance and return, seclusion and subsequent restriction left many questions unanswered.

Following his marriage, Archbishop Milingo says Pope John Paul II summoned him to the Vatican, where he had to promise not to see his wife anymore, and to move to a different monastery.

“Of course I protested. For 43 years as a celibate priest, I only knew God as a male. Now, through my union with my wife, I have come to see the other side of God’s heart, which is female,” he says.

After the separation, his wife, Sung went on a hunger strike in protest. They reunited in 2002.

After courting controversy in his twilight years, the archbishop says he does not regret the choices he has made in life.

About himself, Archbishop Milingo says: “I don’t want to be put on a pedestal. I lead a simple life.”

Does he believe that priests should be allowed to marry?

“When I ordained my first married priests, I went on my knees and asked God to tell me whether ordaining married priests was wrong. He said ‘nonsense.’ I knew I had made the right decision.”