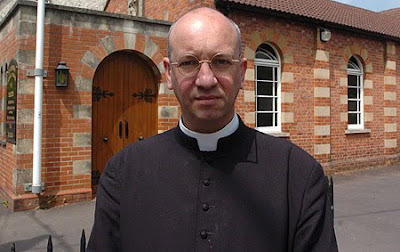 He was meant to be in the pulpit preaching to his flock about the spirit of the Lord...

But Catholic priest Bede Rowe never showed up for Mass because he had been banged up in a police cell on a drink-driving charge after he smashed his car into a railing.

And the 39-year-old confessed his boozy sin to parishioners in a letter of apology.

Shamed Father Rowe, who was nearly three times the limit, wrote: "As you may know, Masses were not said this morning.

"I was not around because I spent the night in police cells.

"Last night I went out for dinner and drank too much. I had an accident coming back. The police came, breathalysed me and I was well over the legal limit.

"I cannot begin to say how sorry and ashamed I am. I have let you, my parishioners, down. I want to say sorry to you all."

The priest was arrested near his home in Warminster, Wilts.

He had left his car at the dinner party and was given a lift home.

But he forgot his house keys so walked back to collect them.

He decide to drive but crashed.

Father Rowe then drove off but was stopped by police 400 yards down the road when a wheel fell off.

His future will be decided by Bishop of Clifton Right Rev Declan Lang who said: "He acknowledges he was in the wrong and makes no excuse for his very foolish action."

Father Rowe, priest at St George's in Warminster, is due at Chippenham magistrates next Thursday.