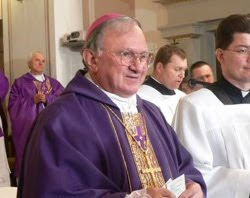 The president of the Pontifical Council for Health Ministry spoke about the significance of living by faith through experiences of suffering and disease this week.

Launching the Genoan Days of Christian Culture in Rome, Archbishop Zimowski delivered a talk on “Therapy, Ethics and Religion.”

The event is running from May 26-29 under the theme "I, the Lord, am your healer. Disease versus religion between ancient and modern eras."

The archbishop began his talk by looking at how disease and suffering are phenomena that, if examined, raise questions that go beyond medicine to reach the essence of the human condition.

In the trauma of experiencing disease we perceive the fragility of human nature, he said, since it can cause fear, dependence and discouragement.

A person's "confidence in life" can be put to the test, the Vatican's head of health noted, "but also his very faith in God and his or her love of the Father."

It's about understanding that life comes from God through the experience of weakness, he said, and about "an abandonment to confidence, a concrete hope in the consciousness that sufferings have a meaning, even if it is humanly incomprehensible, as in God is the source of life."

Archbishop Zimowski referred to John Paul II's words from his 1984 Apostolic Letter "Salvifici doloris," in which the late Pope explained that as man takes up his cross, unifying himself to Christ in his suffering, a "salvific meaning" is revealed to him.

In this way, he said, "the disease becomes for the believer that which he is and wishes to be before God and himself: he can transform it according to his own vision of existence."

While maintaining that faith doesn't deny scientific progress or substitute for medicine, Archbishop Zimowski said that it helps bring about an attitude in the sick person "that transcends sickness and health to live the words of the Apostle Paul, 'Now I rejoice in my sufferings for your sake, and in my flesh I am filling up what is lacking in the afflictions of Christ on behalf of his body, which is the Church.'"