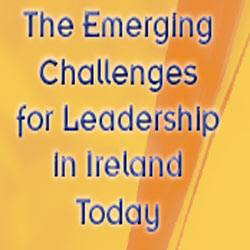 THE current crisis in the Catholic Church and the state is also a time of real opportunity, former Ombudsman of the PSNI, Nuala O’Loan, said yesterday.

Addressing a conference on the Emerging Challenges for Leadership in Ireland, at Mary Immaculate College in Limerick, she said: "It will demand much of those in leadership. They must, I think, be prepared to be humble, to be strong and robust and to work as hard as they can to ensure that in every action they take they act with probity and fairness."

She said both Church and state had become too strong and too independent of those whom they were supposed to serve.

Ms O’Loan said: "There was often no place for real challenge; little recognition of risks and dangers; little analysis of failure.

"Authority and power were used to promote and protect the interests of a priviliged minority or part of an institution, often, I think, in an unstructured and almost unplanned way. However, the result was very damaging to the confidence of all sectors of society in all sectors of governance."

What is required in Church and state today, she said, are listening, inclusive leaders who are prepared to work very hard in the service of others.

Ms O’Loan, a Catholic, said the Church had been much damaged by the abuses of power inherent in the failure to understand and deal with allegations of child abuse.