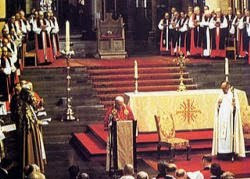 Pope Benedict's visit will probably be billed as an Apostolic Journey--the implication being that he is following in the footsteps of SS Peter and Paul, and that he comes as an apostle and a missionary.

In other words, he's walking where St Augustine walked, and Benedict the Pope will do so in the tradition of Augustine the Benedictine monk. Thursday, May 27 is the memorial of St Augustine of Canterbury, and Friday the 28th the anniversary of Pope John Paul's historic visit to Britain in 1982.

The above photograph from the visit shows the Holy Father reading the lesson at the ecumenical celebration at Canterbury Cathedral.

At the top of the steps you see the famous Chair of St Augustine. That would be Archbishop Robert Runcie to the right dressed in white.

One of the jokes about Robert Runcie was that he 'nailed his colors firmly to the fence.'

At the time I thought Runcie was a rather limp Archbishop--a product of the English old boy system--a broad church liberal who dressed up as an Anglo Catholic when it was suitable to do so.

In retrospect, he seems much better than those who followed him--poor old George Carey who was clearly out of his depth, and now Rowan 'Animal' Williams, who seems more and more fuddled and helpless as the Anglican Communion disintegrates around him.

How different this latest papal visit to Britain will be from Pope John Paul's pastoral visit in 1982. In 1982 I had just finished my training for ordination to the Anglican priesthood and was in Oxford taking my final exams.

The excitement of the Pope visiting Britain was not so great at Wycliffe Hall--the Evangelical Anglican college where I studied. As usual amongst Evangelicals the attitude was 'so what?' Nevertheless, it made an impact on me.

John Paul's obvious charisma, and the love with which he was greeted by the faithful put poor old Robert Runcie in the shade.

Runcie met the pope once again, quite by accident when they were both on a trip to Africa.

Runcie's aide mentioned that the Pope was also in town and they had an informal get together.

Runcie came away from the meeting rather jealous of the pope's entourage.

What always amuses me in Anglican-Catholic meetings is how the Anglicans put themselves up on a par with the Catholics and Orthodox: How they love to say, "There are three ancient branches of Christendom--Roman Catholic, Eastern Orthodox and Anglicanism."

Err, the Church of England certainly has splendid stuff about it (nice buildings--which are ours anyway) etc. etc. but numerically alone--not to mention theological issues--the Church of England is minute. In world terms the CofE makes up something like .5% of Christians.

But let's not throw stones. I think the present Pope's visit to England will be very different.

Pope John Paul's was an pastoral visit. It was loaded with ecumenical assumptions which no longer apply.

I doubt very much if Benedict XVI will do much more than pay a private courtesy call to the Archbishop of Canterbury--drink tea, discuss the Muppets, exchange gifts and then pose for the cameras.

Pope Benedict's visit will probably be billed as an Apostolic Journey--the implication being that he is following in the footsteps of SS Peter and Paul, and that he comes as an apostle and a missionary.

In other words, he's walking where St Augustine walked, and Benedict the Pope will do so in the tradition of Augustine the Benedictine monk.

May he have great success and may Great Britain be great again as she returns to the ancient faith of her fathers.