Pope Explains Authority and the Priesthood 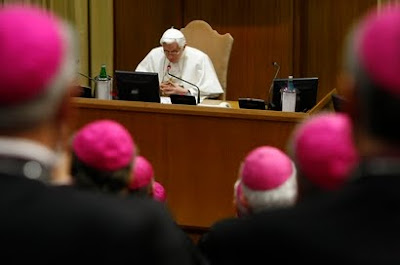 The Pope cannot do whatever he wants, and instead must obey Christ and his Church, Benedict XVI says.

The Holy Father made this reflection today at the general audience when he spoke of the last of the three primary tasks entrusted to priests.

Noting that the Year for Priests is nearing its conclusion, and that he had already given catecheses on teaching and sanctifying, the Pontiff considered the theme of guiding.

He acknowledged that broaching the theme of authority in today's world is complex. He reflected that dictatorships of the last century have made mankind suspicious of authority -- a "suspicion that, not rarely, is expressed in upholding as necessary an abandonment of all authority that does not come exclusively from men and is subject to them."

The Church's authority, however, is that of service, exercised "not in her own name, but in the name of Jesus Christ, who received from the Father all power in heaven and on earth," Benedict XVI clarified.

And Christ "willed that the Apostolic College, today the bishops in communion with the Successor of Peter, and priests, their most valuable collaborators, should participate in his mission to take care of the People of God, to be educators in the faith, guiding, animating and sustaining the Christian community."

The Pope noted that priests' authority comes from God, but its efficacy is closely linked to the person of the priest.

"To be a pastor according to the heart of God there must be a profound rootedness in living friendship with Christ," he said.

"In fact, no one is really capable of feeding Christ's flock if he does not live a profound and real obedience to Christ and to the Church, and the docility itself of the people to their priests depends on the docility of priests to Christ."

Looking at the history of the word "hierarchy," the Holy Father reiterated that "authority does not come from man himself, but has its origin in the sacred, in the sacrament; hence it subjects the person to the vocation, to the mystery of Christ; it makes of the individual a servant of Christ and only insofar as he is a servant of Christ can he govern, guide for Christ and with Christ."

He clarified that "even the Pope -- point of reference for all the other pastors and for the communion of the Church -- cannot do what he wants; on the contrary, the Pope is custodian of the obedience to Christ, to his word taken up again in the 'regula fidei,' in the Creed of the Church, and must proceed in obedience to Christ and to his Church."

Entrusted with such a weight of obedience, the Bishop of Rome concluded the audience by asking for prayer.

"I would like to invite you to pray for me, the Successor of Peter who has a specific task in governing the Church of Christ, as well as for all your bishops and priests," he said.

"Pray that we will be able to take care of all the sheep of the flock entrusted to us, also those who are lost."
SIC: CATHNet
EDITED BY Sotto Voce