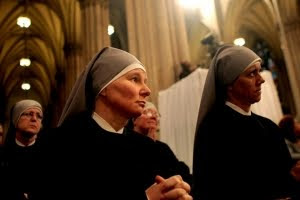 Earlier this month, in something of a surprise, a nun at a Catholic hospital in Phoenix was excommunicated for approving a first-trimester abortion last year at that hospital to save the life of a critically ill patient.

“An unborn child is not a disease,” said Bishop Thomas Olmsted of the Phoenix diocese.

“While medical professionals should certainly try to save a pregnant mother’s life, the means by which they do it can never be by directly killing her unborn child.”

The irony here is thick: it has taken years, sometimes decades, to bring sex-abusing priests to justice, but this observant sister, Margaret McBride, was excommunicated in a matter of months for making a compassionate and impossible decision for one of her parishioners.

This decisive action against one nun in one ethically murky case comes as an “apostolic visitation,” or investigation, of all of America’s 60,000 religious sisters is underway.

Its purpose is unclear, though the man who ordered it, Cardinal Franc Rode, is well known for his views about “irregularities” in post–Vatican II religious life.

“You could say,” he told a radio interviewer last year, that the investigation “involves a certain secular mentality that has spread in these religious families, and perhaps also a certain feminist spirit.”

Anxious observers and commentators worry that, as a result of the inquiry, nuns will be forced to take steps backward—into the head coverings and habits, for example, that were made optional after the Second Vatican Council in 1965.

They worry further that sisters who have worked more or less independently for decades will have their independence curtailed: the church has been known to remove teachers from their posts, for example, for teaching an insufficiently orthodox theology.

With dioceses still hurting for cash due to settlements from the sex-abuse crisis, they worry that with the number of sisters dwindling in the West, real estate that has belonged to a religious community for generations will be sold or reappropriated by the diocese.

At a time when the male leadership can be blamed for leading the church to a state of crisis—a time when the voices of women are needed more than ever—even the modest roles accorded to female clerics have come under attack.

The specific reasons for the investigation are unclear (or, more probably, not public), but the suspicion, clearly, can be put in the crassest terms: too many American nuns have gone off the reservation.

Pope Benedict XVI has a reputation as the guardian of Catholic orthodoxy—if not of individual children and families—and his appointments in the Curia reflect his priorities.

“Virtually every congregation in the country realized that the Holy See has the authority to ask for information and that they have the obligation to respond,” Mother Mary Clare Millea, the American nun who is leading the investigation on behalf of the Vatican, told the National Catholic Reporter.

Millea insists her investigation has no punitive mission, but in the past such visitations have been conducted when Catholic institutions go way off the rails: priests, for example, received visitations in the aftermath of the U.S. sex-abuse crisis earlier this decade.

Millea will send her reports on individual communities back to Rome, along with a final, summarizing document.

The Congregation for Religious will decide what to do about them.

Not two days after the publication in this magazine of “A Woman’s Place is in the Church,” which argued that the hierarchy in Rome needs to embrace modernity and include women at all levels of church management and decision making, I received an e-mail from a nun.

“I just had to make this addition even though speaking up during this time of Visitation has its risks,” she wrote.

The apostolic visit, “punitive by definition, demonstrates…that male church leaders are seeking to keep modernity at bay, keep women in a secondary place…It is so true that if women had any influence at all in our Church, the Church would be so much more whole and healthy.”

Many religions, including and especially Catholicism, consider obedience—to God and to religious authorities—a crucial value. The life of a Catholic is explicitly a kind of human sacrifice, an extraordinary act of submission.

When a nun takes vows, she promises to God that she will remain chaste, that she will relinquish worldly things (that’s the vow of poverty), and that she will submit to her abbess, to the church, and to God. But modern democratic society puts such vows to the test, for in our world, blind submission to authority is not a virtue but a vice.

Just as modernity doesn’t want to accommodate insular groups of men who live behind guarded walls and make decisions that affect the domestic lives of half a billion people, it will also eventually reject what amounts to a kind of patriarchal apartheid, in which female clerics are given no voice in the power structure and yet are expected to submit to it.

“Churches that cling to sexism in the name of God will find themselves ignored on other issues,” wrote Sister Joan Chittister, a popular Catholic spiritual writer and advocate for women’s ordination, in The Huffington Post earlier this year.

“Young women will begin to wonder how it is that churches that teach equality are the last bastions of sexism in the modern world. People of faith will be hard pressed to explain how it is that the question of equality of the sexes is being led by secular institutions rather than by ministers who proclaim the Good News and then stop it from coming.”

When Chittister speaks, the Vatican rebukes her, yet she remains as popular as ever, selling books, drawing standing ovations, opining in print and online.

Similarly, the thousands of American nuns who recently voiced their support for the health-care-reform bill—in defiance of the bishops’ position against it—may be just the kind of thing Cardinal Rode hopes to suppress.

“When I’m drafting right-to-life language, I don’t call up the nuns,” Rep. Bart Stupak said dismissively of the sisters’ activism. Their point, in short: that granting health care to the nation’s poor and needy—especially children—dramatically outweighed the abortion controversy and, further, was in keeping with the church’s broad theology of respecting life.

The sisters, it turned out, had the upper hand: they rode the wave of support for reform right to the president’s desk.

For more than a thousand years, becoming a nun was the best—and often the only—way for a young woman to get an education and to earn a modicum of independence. In the modern West, though, women have other options.

In the United States, the number of religious sisters has shrunk by two thirds since 1965, to 59,600.

(Worldwide, the collapse is not as dramatic: the number of sisters has dwindled by just one third over the same period, to 750,000.)

And while sisters still outnumber priests across the globe, women’s desire to become nuns is plummeting.

Less than 4 percent of American Catholic women have ever “seriously” considered becoming a nun, according to 2008 data by the Center for Applied Research in the Apostolate, compared with 9 percent in 2003.

And those numbers have been in decline since Vatican II. It’s no wonder, really.

When men have all the power, and they “investigate” women who seem to disrespect their authority, why not become a doctor, or a lawyer, or a stay-at-home mom, and submit to God without the authoritarian meddling?