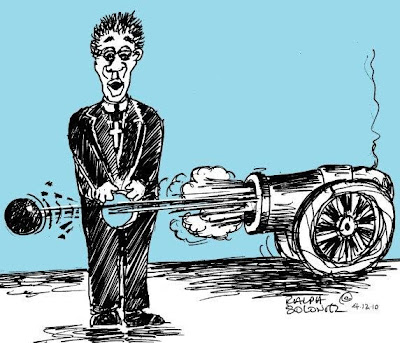 With roots in the Council of Jerusalem of the first century, canon law is a cumbersome but necessary set of regulations that help church officials govern the Catholic Church on issues as diverse as clergy sexual abuse and the role of baptized people within church structure.

In most circumstances, canon law gets little notice even though it influences the faith life of average Catholics more than they might realize. Many of the everyday decisions of priests and bishops and efforts by dioceses to carry out their mission through diverse ministries are guided by the omnipresent Code of Canon Law.

Officially, the 1,752 canons guide the actions of bishops, explained Father Kevin McKenna, pastor of Sacred Heart Cathedral in Rochester, N.Y., and a canon law expert. Under the long-established structure of the church, it is the bishops who oversee church operations at the local level and are responsible for all decisions in their diocese.

"Canon law outlines how a bishop is to act and assures their rights and responsibilities," Father McKenna told journalists gathered May 25 for a daylong seminar at the U.S. Conference of Catholic Bishops headquarters and co-sponsored by the Canon Law Society of America. "They have a certain measure of autonomy, but it's relative autonomy, limited by the pope for the unity of the church."

Father McKenna and three other canon law experts outlined the development of canon law over 19 centuries until its formalization by the church in 1917.

The code was revised by the Vatican in 1983 in response to a suggestion that came from Pope John XXIII as he convened the Second Vatican Council.

The time it took for the revisions to be made demonstrates the pace at which the church functions, each canonist acknowledged.

The canon law structure also can prove to be a bit unwieldy to work under for those outside the hierarchy of the church, said Father John P. Beal, professor of canon law at The Catholic University of America.

"It is the practice of the Holy See to correspond only with the bishops and tell the bishop to communicate this with the affected parties," Father Beal said. "In the hierarchical pecking order, I am a flunky."

When a serious violation of canon law occurs -- such as sexual abuse -- the church handles cases much the same way as a criminal case proceeds in a civil court. Evidence is gathered by the promoter of justice -- usually a priest but not always -- whose role is similar to that of a prosecuting attorney. The promoter of justice presents information gathered at a hearing before a diocesan tribunal, or court, of three priest judges.

It may take several hearings over several months for all of the evidence to be presented.

Once the tribunal decides a case, both parties have the right to appeal to the Vatican's Congregation for the Doctrine of the Faith.

Because a case can take months to resolve, silence is imposed on witnesses, Father McKenna explained.

Msgr. Lawrence A. DiNardo, episcopal vicar for canonical services in the Diocese of Pittsburgh, said the imposition of silence, often called pontifical secrecy, is necessary to protect the rights and privacy of both the accuser and the accused. The practice of secrecy was not established because the church wanted to hide its shortcomings, he said.

When formal charges are filed against a cleric, they must be proved with moral certitude, a standard that Msgr. DiNardo described as more stringent than the reasonable doubt standard of civil courts.

He explained that the church can impose one of three penalties on someone who violates canon law. They are called medicinal penalties because they are intended to heal the harm caused by the offense while leading the offender to a return of good standing within the church.

An interdict entails the same liturgical restrictions as excommunication, but it does not affect a person's ability to govern in the church or limit his or her ability to receive income through a church position.

A cleric also can be dismissed from the clerical state, in church terms. That decision is left to the Congregation for the Doctrine of the Faith, he said.

In addition, a cleric can be assigned to a life of prayer and penance, as in the case of Father Marcial Maciel Degollado, founder of the Legionaries of Christ. After investigating allegations that Father Maciel had sexually abused young seminarians, the Vatican in May 2006 ordered him to stop practicing his ministry in public and to live a life of prayer and penitence. He died in January 2008 at age 87.

As the sexual abuse scandal exploded in the United States in 2002, the American bishops, with Vatican approval, adopted a set of norms for dealing with clergy sexual abuse claims. The process had to meet the strict requirements of due process under canon law, explained Mercy Sister Sharon Euart, executive coordinator of the Canon Law Society of America.

She told the journalists that the church has considered the sexual abuse of children by clergy a grave offense since the Middle Ages. Beginning in the 1980s, the U.S. bishops sought an administrative process to shorten the length of time it took between when an abuse allegation was received and when a priest could be suspended from ministry, she said.

While it took several years, a revised process that met canon law requirements was finally approved by Pope John Paul II in 1993. By the late 1990s, most dioceses had established a process for handling abuse cases, but they were not used widely, she said.

The 2002 norms reinforced the bishops' efforts to streamline the process to remove a priest accused of abuse from ministry, Sister Sharon added.