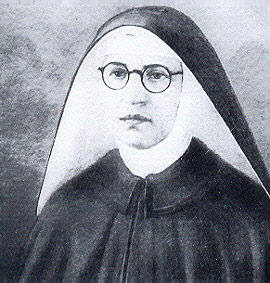 Although he was not present at the rite, after the Angelus he commemorated her for her "extraordinary devotion" to the Holy Face of Christ.

The beatification ceremony, presided over by the prefect of the Congregation for the Causes of Saints, Archbishop Angelo Amato, took place on Trinity Sunday at the Basilica of St. Mary Major.

According to Vatican Radio, many of those present at the rite were from Argentina and other parts of South America, a sign of the love for her in her adopted home of Buenos Aires.

Archbishop Amato reportedly said that the trinitarian stamp that marks each of us as children of the Father, brothers of Christ and temples of the Holy Spirit has even greater visibility in the saints.

Blessed Pierina, he stated, was "a trinitarian creature, shaped by the mercy of the Father, redeemed by the Crucified son and enriched by the grace of the Spirit of holiness."

The Holy Father spoke briefly of the life of the nun from the Daughters of the Immaculate Conception order in the Argentinean capital after the Angelus on Sunday.

Born in 1890 in Milan, Italy, she followed other siblings into the religious life, dedicating herself to education in Argentina and Italy from the age of 23 until her death in 1945. She had an "extraordinary devotion" to the Holy Face, he said, which saw her through trials and sicknesses.

During Sunday's Mass at St. Mary Major, the prefect of saint's causes listed this devotion along with her Marian piety and her offering of prayer and suffering for the sanctification of priests as the three characteristics of holiness defined by Pope Benedict XVI in the Apostolic Letter concerning her beatification.

The archbishop explained that Mother Pierina's devotion to the Holy Face originated in visions she had of Immaculate Mary holding a scapular with the face of Jesus on one side and a radiant host on the other. She was told by the Virgin of the images' value as an armor of defense and a token of Jesus' mercy and love.

She later produced the Holy Face from the visions in the form of a medal that was distributed around the world.

Concluding, Archbishop Amato remembered her for the "concrete sign" she left in history of the Triune God and how she still "invites all people to see the attraction of divine beauty."

The remains of Blessed Pierina reside at the Holy Spirit Institute in Rome.